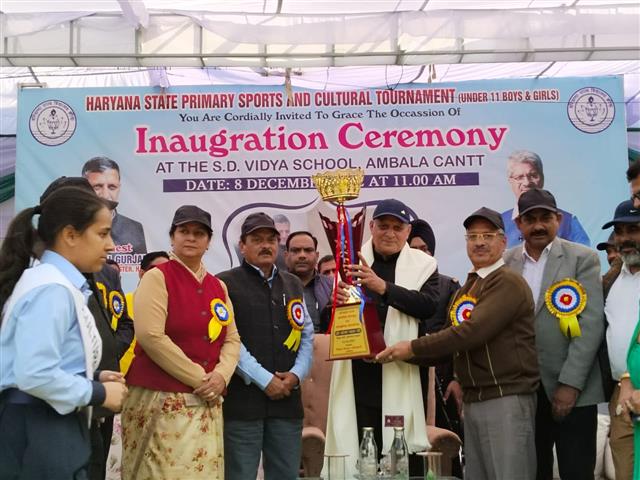 Minister Kanwar Pal being being welcomed at the meet in Ambala.

State Education Minister Kanwar Pal said the government had been making efforts to promote sports and boost the requisite infrastructure so that sportspersons could keep performing well and continue bringing laurels to the country.

Speaking on the inaugural day of the three-day Haryana State Primary Sports and Cultural Tournament (under-11 boys and girls) organised at SD Vidya School, Ambala Cantonment, he said, “Participation in sports is as important as educational studies because a healthy mind resides in a healthy body.”

“In current times, the use of mobile phones and other gadgets has increased tremendously, due to which the younger generation is facing various physical complications. Physical activities and sports not only help us to remain physically fit, but also help in reducing stress. Several players from the state have brought laurels to the country at the international level. The government has been making efforts to provide all facilities and boost infrastructure so that sportspersons from the state keep performing well,” he added.

District Education Officer Sudhir Kalra said, “Around 4,600 students from 22 districts of Haryana are participating in the three-day meet.”