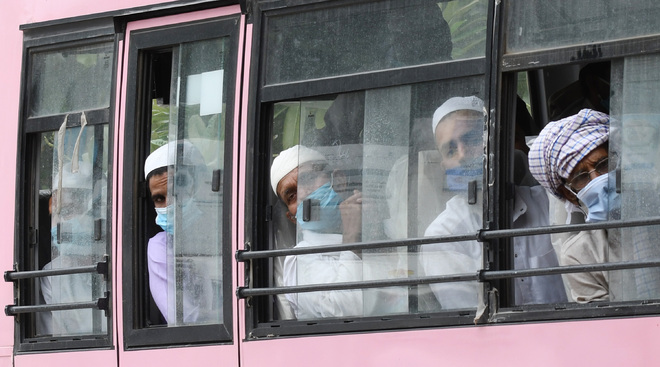 Over a month after being traced and tested for Covid in Haryana, most of the Tablighi Jamaat attendees from other states have left for their homes. They were sent back on buses and trains being run for migrants.

Bringing the first spike in Haryana’s Covid cases last month, as many as 1,013 of 1,023 Jamaatis from Bihar, Rajasthan, Telangana, Kerala and Uttar Pradesh have been sent to their respective states along with migrants.

Confirming this, the nodal officer for the transportation of migrants, ADGP (CID) Anil Rao, said those left behind include some against whom cases were registered for violating Section 144 of the CrPC. Of the 10 Jamaatis left behind, six have cases registered against them. They, too, have been granted bail by the court and are free to go back. But they are likely to return to their native states after attending the next court date due in their cases. The remaining four are individual cases belonging to Assam and Kerala and will be put on the train as and when possible.

Haryana had traced 1,636 Tablighis during the first phase of the lockdown. Of these, 107 were foreign nationals, 1,023 belonged to other states and 508 to Haryana.

According to information, FIRs were registered against 29 of them. They had attended the Tablighi event in Delhi that triggered a spurt in cases or of trying to resist being quarantined or isolated.

So far, Haryana has sent over 2 lakh migrants to their native places in buses or trains. While 57 trains have so far left carrying, on an average, 1,400 migrants each, taking them to Bihar and Madhya Pradesh, as many as 4,600 buses have proceeded to various destinations in Uttar Pradesh, Madhya Pradesh and Rajasthan in the last few days.

Each bus had a limit of 30 occupants on an average. As many as 11,000 Haryanvis have been brought back from other states.