NGT stops cutting of trees at Jyotisar Tirtha in Kurukshetra : The Tribune India

NGT stops cutting of trees at Jyotisar Tirtha in Kurukshetra 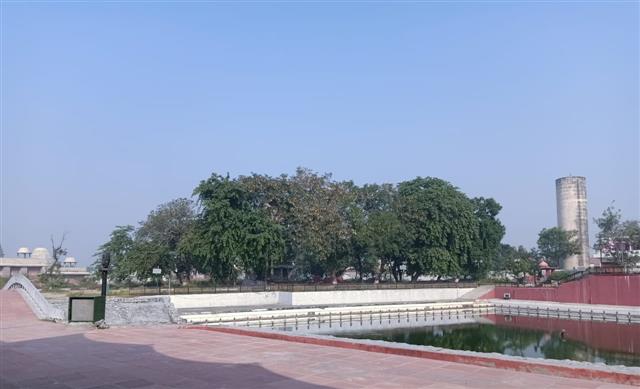 A view of standing trees at Jyotisar Tirtha in Kurukshetra. File Photo

The National Green Tribunal (NGT), while hearing a petition filed by Green Earth, an NGO, has ordered officials not to cut trees standing at Krishna Vatika, Jyotisar Tirtha, in Kurukshetra.

Around 24 trees of indigenous species support the growth of flora and fauna and provide natural shade to pilgrims on the Tirtha compound. The Tourism Department of Haryana and Kurukshetra Development Board tried to cut the trees, which is unreasonable. Naresh Bhardwaj, executive member, green earth

Jyotisar, the birthplace of Gita, is being developed as a major tourist destination in Kurukshetra. Green Earth in its application submitted that 24 trees of indigenous species, which were planted by former Prime Minister Gulzarilal Nanda and former Haryana Chief Minister Bansi Lal were standing at Jyotisar since the 1970s. The Tourism Department and Kurukshetra Development Board tried to cut trees in April this year, the NGO said.

The applicant filed the application with the prayer inter alia for issuance of directions to respondents, Deputy Commissioner Kurukshetra, secretary in-charge, Tourism Department Haryana, and Chief Executive Officer, Kurukshetra Development Board, not to cut any tree standing at Jyotisar Tirth in Kurukshetra, to ensure de-concretisation of roots of trees at least one meter in radius from the stem and no hoarding and wire/cable on trees.

The applicant also relied on an order dated July 21, 2015, passed by the NGT in which directions were given for protecting the trees standing at Jyotisar Tirth.

The Tribunal in its order stated: “Let notices be issued to respondents requiring them to file replies specifically responding to all material averments made in the application within two months. In the meanwhile, there shall be no cutting of any of the trees standing at Krishna Vatika, Jyotisar Tirtha, Kurukshetra. Deputy Commissioner, Kurukshetra, and Chief Executive Officer, Kurukshetra Development Board, are directed to ensure the protection of the trees in accordance with directions already issued by this Tribunal in 2015.” The next hearing is on August 26.

Naresh Bhardwaj, executive member, Green Earth, said “Around 24 trees of indigenous species, including nine Arjun threes, one Banyan, one Neem, eight Siris, two Gulmohar and three other trees are standing there. These trees are fully grown and supporting the growth of flora and fauna and providing natural shade to pilgrims at the Tirtha compound. The Tourism Department of Haryana and Kurukshetra Development Board tried to cut the trees, which is unreasonable.”

“The representatives of the NGO and residents of Jyotisar Tirth opposed cutting of full-grown green trees. We made several representations at the local level, but to no avail. We came to know that there are plans to cut the trees in the coming days following which we had no other option, but to approach the NGT,” he added.