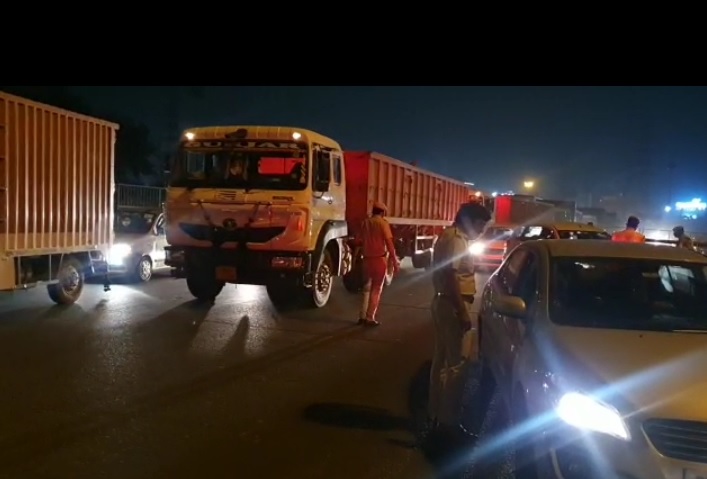 Delhi Government’s decision to impose night curfew within the city limits and the resultant barricades on the city’s borders led to traffic snarls at the Sarhaul border on Tuesday night.

The border was already traffic bottleneck area, mainly because of an ongoing construction of an underpass, but snarls caused by authorities allowing vehicles only after checks caused harried several late night commuters, particularly those heading toward the airports, added to the chaos.

"My mother has her flight to Canada and we have been stuck here for over 45 minutes. We left home an hour earlier than we would as we know the congestion possibility here but this checking has worsened the issue,” said one such commuter, Naina Chadha.

Delhi Police have installed checkposts allowing those with valid tickets to pass. Those who don’t are questioned vigorously about their reasons to travel into Delhi. Delhi government has announced night curfew until April 30, and commuters expect such traffic snarls to last at least that long.

But commuters aren’t the only harried lot. Restaurant owners in Gurugram complain that the long traffic queues would likely keep patrons away.

“There is no curfew in Gurugram but the situation for us is curfew like. People coming from Gurugram have to cross border and take a u-turn to reach the mall. The usual traffic jams in these parts already cause cost us patrons. And now this,” said Pankaj Ghosh, who owns a restaurant at the Ambience mall.

Meanwhile, Gurugram Police have issued an advisory for people to avoid unnecessary travel.