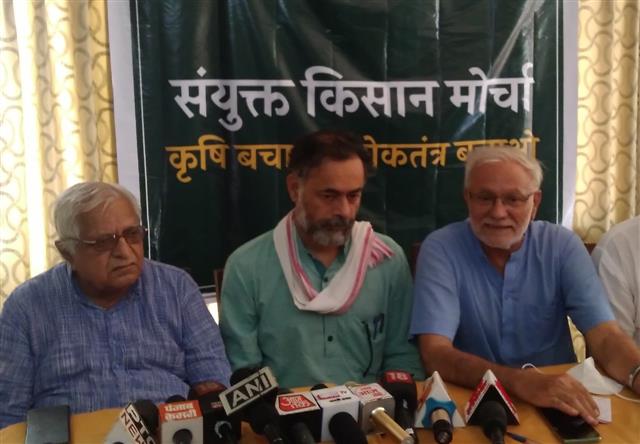 The farmers’ agitation is all set to enter the next level to save democracy with the slogan ‘kheti bachao, loktantra bachao’ with effect from June 26, which marks the completion of seven months of the stir.

Associations of labourers, women, students, Dalits and minorities will be roped in for the purpose and memoranda will be submitted to the President through the governors of different states on June 26.

An announcement to this effect was made at a joint news conference of the Sanyukt Kisan Morcha (SKM) and office-bearers of other farmers’ organisations here on Thursday.

Incidentally, June 26 also marks the imposition of Emergency by the Congress government in 1975.

“It is an irony that the central BJP leadership, which claims to be victim of the national emergency imposed by Indira Gandhi, has declared a sort of undeclared emergency in the country wherein all voices of dissent are suppressed with a brutal force,” said Inderjit Singh, vice-president of the Haryana unit of All India Kisan Sabha.

Endorsing his views, SKM leader Yogendra Yadav said the BJP government at the Centre had made emergency the normal way of life.

“The government has been trying to sabotage the farmers’ agitation, but it has failed to do so. They are stating that the stir has been politicised. Let me tell them that no political party in the country has the capability to sustain such a massive agitation for so long,” maintained Yadav.

On being questioned about the possible solution of the stalemate between the farmers and the government, he asserted that the only solution was that the satta (government) should bow before the janta (public) to uphold democratic values.

“However, the ruling party’s leadership fails to accept this premise owing to its arrogance. Instead of having open-minded talks with the farmers, they are trying to incite their followers to weaken the stir by all means,” he stated.