Operations to control locust on in Bhiwani, Mahendragarh : The Tribune India

Operations to control locust on in Bhiwani, Mahendragarh 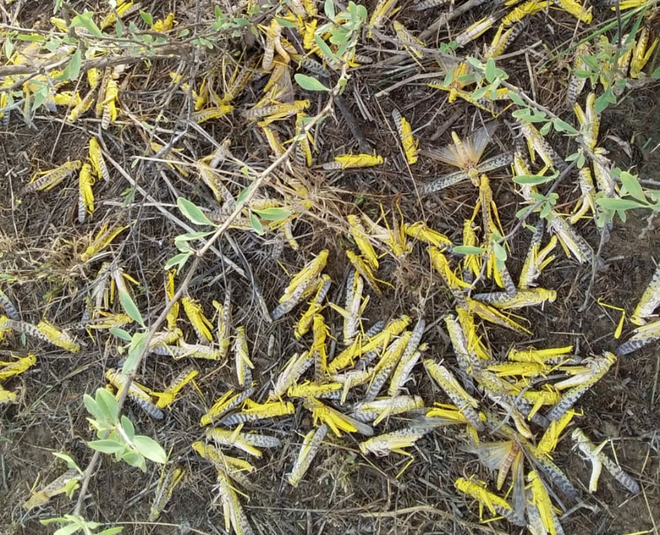 Locust swarms are still active in some villages of the Bahal and Lolaru blocks in Bhiwani even as the local authorities have intensified their operations. The authorities divided the affected areas into four sectors to launch a nightlong operation.

Meanwhile, a swarm made its way to a village along the Rajasthan border. This was fifth time that a swarm was spotted in the district.

The swarms kept flying within a radius of 10 km throughout the day after moving away from Surehti Pilania on Tuesday morning. Locusts were spotted over Bhagdana, Jhuk, Malda, Pali, Jant, Dewas, Bhandor, Beri and nearby villages of the Mahendragarh block.

Officials said they had spotted locust eggs. “It is easier to eliminate and control locusts during this stage,” said Pratap Singh, Deputy Director, Agriculture, Bhiwani.

“A tractor-mounted spray and fire brigade were put to use to carry out the operation while fogging machines were pressed into service during the daytime. The leftover swarm has scattered. We have controlled between 55 per cent and 75 per cent of the swarms the previous night.”

He said they had detected between 2 per cent and 5 per cent crop loss, but exact assessment would be made in the next few days. “The swarm in the Dadri region has moved towards Mahendragarh. The swarm in Chahar Kalan and Chahar Khurd villages in the Bahal area is still active in these villages,” he added.

Mahendragarh officials stated that they had killed more than 75 per cent of the locusts. “Three swarms moved away by Monday afternoon. A swarm entered Surheti village from Rajasthan in the evening. A major part of the swarm settled in bordering villages of Rajasthan,” said an official.

Farmers remained alert, kept banging utensils and made loud noise through tractor-fitted music systems to scare the locusts away. The swarm moved to Rajasthan later in the evening. Sources said more than 15 per cent damage to the bajra crop had been reported. The authorities denied any crop loss.