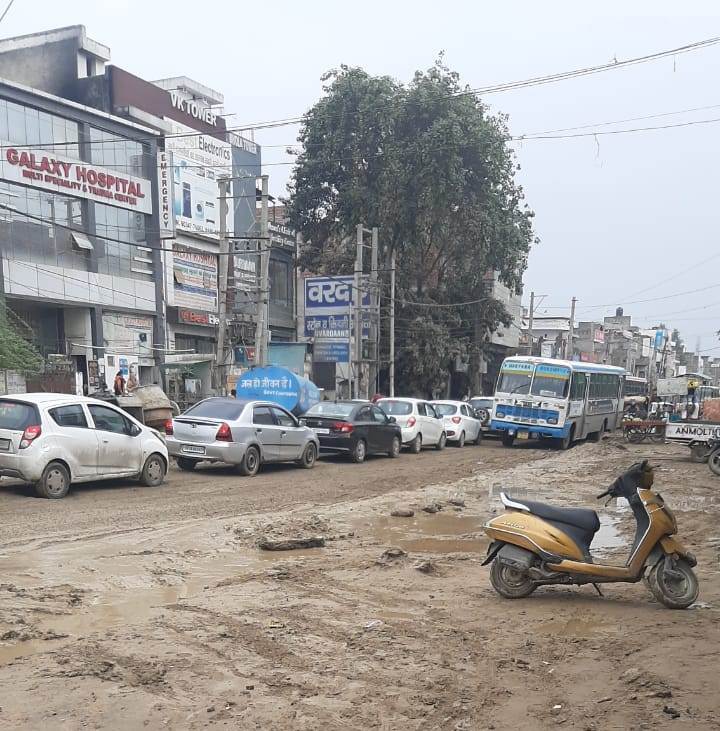 Faridabad: With several deadlines passed and the authorities concerned failing to honour its promise of providing motorable roads soon after the monsoon season in the Smart City here, residents seem to be confused when it comes to official accountability. "We do not know who is responsible for maintenance of which road. The city has got four agencies, including the Municipal Corporation Faridabad (MCF), Haryana Shahari Vikas Pradhikaran (HSVP), Faridabad Mahanagar Development Authority (FMDA) and Faridabad Smart City Limited (FSCL), for development works. This has not only left residents perplexed, but also brought shame on the Smart City tag,'' said an office-bearer of the Greater Faridabad Residents Association (GREFA), a body of the RWA of several builder housing societies in the city. He said, "Officials of these agencies pass the buck on each other when someone asks the reason for the unusual delay in repairs of roads, lying damaged for the past several months." "Multiplicity of the agencies and no clear-cut accountability has perhaps been the factor behind poor work," remarked a local sitting MLA.

Rohtak: Amid tug-of-war between advocates and workers engaged for towing vehicles in the city, the Municipal Corporation's move to privatise parking zones inside white line on main roads has failed to get the nod of the General House. It was obvious as several councillors as well as traders were strongly resisting the move. "The development has given a jolt to both the authorities and an influential local leader. The authorities wanted to raise funds by privatising parking zones while the leader wanted the contract of this project for his loyalist, who is already on the target of the Opposition due to political and other reasons," reacted an official.

Ambala: The call of participating in active politics and mission Punjab given by the BKU (Charuni) chief, Gurnam Singh Charuni, didn't go well with his own union activists. While some farm activists joined other unions another group floated its own union. There are still Gurnam's supporters, who are sticking with his union, but they are not happy with the decision taken by him. A farmer leader said, "Some activists have left the union. Though it will not make any major impact on the union, it has sent a wrong message. There are many activists, who are still with the union, but not happy with Gurnam Singh Charuni's move of participating in active politics." Another farm leader said if they also started campaigning and seeking votes, then people would look at them as opportunists and politicians instead of farm leaders, who were struggling for farmers' cause.

War of words over projects

Panipat: A war of words has erupted among supporters of the ruling party and people from the opposition people on the social media over some development projects in the city. Notably, two major projects - widening of Assandh Road and Gohana Road - are going at a slow pace. Some supporters appreciated the ruling party for these projects, but others mocked them by saying 'vikas' was done at a slow pace. Though the reasons for the slow pace of work may be weather disturbance, delay in completion of roads has created many problems for the people.

Hisar: Haryana's rural areas, especially those bordering Uttar Pradesh (UP) and Punjab, are virtually in electoral mode these days with the two neighbouring states going to the polls. The Jat issue dominating the western UP has attracted interest of the people in Jind, the Jat heartland, and the old Rohtak region. The Punjabi belt adjoining Sirsa, Fatehabad and Narwana segments is not only keeping a track of developments, but are also involved in politicking. The new found love and brotherhood between Haryana and Punjab farmers when they came close during the farmers' agitation while sitting on the Delhi borders has also evoked interest of Haryanavi people in Punjab politics. "I am in regular contact with some of them and get an update about Punjab politics," said Kuldeep, a resident of Kharad village in Hisar district, who spent months at the Tikri border and jointly worked with Punjab farmers. "Residents of Sonepat, Rohtak, Panipat and Jind have close relations with the people in the western UP, who share the relation of 'Roti-beti'. The 'khap' system in Haryana and the UP is common. So, they are also politically connected with each other," said a political observer.