Like other states, Hry leaders want Rahul to head party 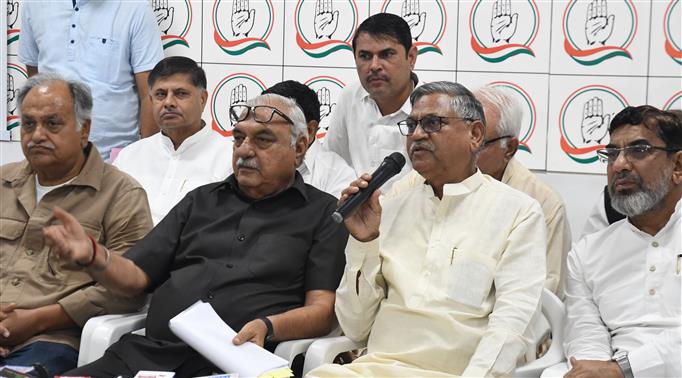 No place for family politics

Workers should get their due. They should not suffer because of family politics. They have worked so hard. Kumari Selja, Congress Working Committee Member

Like several states, the delegates passed another resolution for Rahul Gandhi as Congress national president. They urged him to file nomination papers for the party President’s post. Besides, they assured that there would be historic participation in Gandhi’s “Bharat Jodo Yatra”.

Also, former Cabinet minister Kiran Choudhry’s daughter Shruti Choudhry, who is also the working president of the state unit, was present at the meeting.

On the delegates’ list, Selja said, “Workers should get their due. They shouldn’t suffer because of family politics. They have worked so hard.”

Former CM Bhupinder Singh Hooda, who was present at the meeting, addressed a press conference along with Bhan later. When asked that Selja had objections to the delegates’ list and had met Congress Central Election Authority Madhusudan Mistry, Bhan replied that he had also met Mistry. “The PCC delegates list is final. There is no ‘Bhai-Bhatijawad’ (nepotism) in the list,” added Bhan.

Hooda said, “The party is united.” While answering questions, Hooda said he welcomed the apex court judgment on the validation of the Haryana Sikh Gurudwara (Management) Act 2014. “We had passed the Act for the welfare of Haryana Sikhs,” he added.