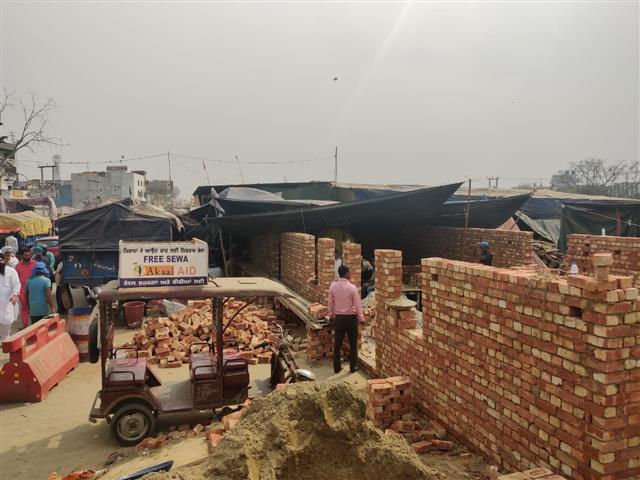 Construction in the area. — Tribune Photo

Police have booked the agitating farmers allegedly for constructing concrete structures on NH-44 and digging a borewell in the Kundli area despite ban orders.

The police have registered two separate cases against the farmers under various sections of the IPC and the National Highway Act.

Thousands of farmers have been protesting at the Delhi borders against the three farm laws for more than three months. The agitating farmers have started constructing concrete structures on the National Highway-44 at the Singhu border, where they have been camping since November 26.

Masons and labourers can be seen at various places constructing permanent structures on the roadside.

“We have been staying at the Delhi borders for the past over 100 days, but the Centre does not heed to our demand of repeal of the three farm laws. That’s why we have decided to construct special structures and have also brought solar panels here,” said Gurpreet Singh Sahabana, district vice president, Ludhiana.

“We have been constructing permanent structures to maintain our union office and are ready to fight till our last breath. We will go back only after winning the fight,” said Gian Singh Mand, block president, BKU (Lakhowal), Ludhiana.

The farmers had no option but to build concrete structures to stay for long to fight the battle effectively and to save the protesting farmers from the summer, said Harinder Singh Lakhowal, general secretary, BKU (Lakhowal).

“We have prepared for the long haul and will not step back till the government repeals the laws. We have come at the Centre’s door to save our own land and our future generations,” Lakhowal said.

“Not only permanent structures, but we have been installing solar panels and also constructing offices at the site,” he added.

Following the complaint, the Kundli police have registered a case under the National Highway Act and Sections 283 and 431 of the IPC.

In another complaint, Pawan Kumar, secretary, Municipal Committee, Kundli, said despite the ban order, a protesting farmer, Karam Singh of Punjab, was digging a borewell in a field near the KFC Mall near NH-44. The municipal engineer tried to stop the digging but it “continued”.

The police have registered a case against Karam Singh of Bathinda under the National Highway Act and Section 188 of the IPC.

Inspector Ravi Kumar, SHO, Kundli, said two separate cases had been registered against the farmers for constructing illegal structures on NH-44 and for digging borewell on the complaint of the Project Director, NHAI and secretary, Municipal Committee, Kundli. Probe in the matter is under way, he added.

8 hours ago
3
Punjab THE TRIBUNE INTERVIEW 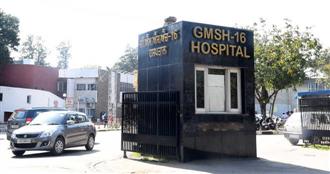