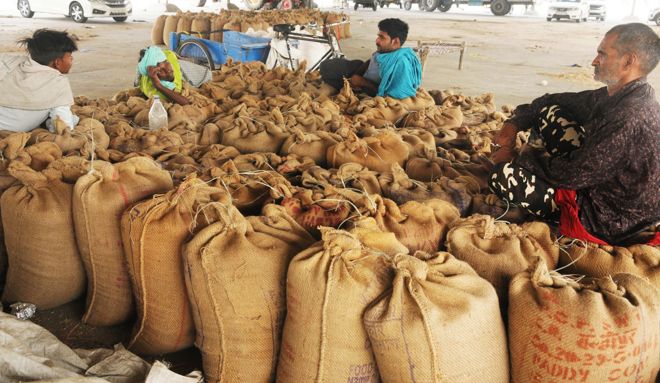 Three days after the restart of the procurement of wheat, farmers are not showing enthusiasm to bring their produce to grain markets.

Three days after the restart of the procurement of wheat, farmers are not showing enthusiasm to bring their produce to grain markets.

Sources say a majority of the farmers have sold their crop to private players or the farmers are holding it back, anticipating higher prices in the coming days.

As per the sources in the Haryana State Agricultural Marketing Board (HSAMB), around 60 farmers came to grain markets with nearly 1,890 quintal of wheat from May 16 to 18.

The Union Government recently put a ban on the export of wheat and extended the functioning of the grain markets for the purchase of wheat.

The data of the Agriculture Department says that 56,320 farmers got themselves registered on the “Meri Fasal Mera Byora” portal for selling wheat crop, but still around 42,100 farmers came to grain markets, while nearly 14,120 farmers did not come to grain markets to sell their produce.

Official figures said out of the total procurement of wheat, 46,7,229 quintals had been purchased by the private players in grain markets and 56,64,921 quintals by the government agencies. An official said there were many private players who had procured wheat directly from the fields and did not pay market fee.

“After the directions of the state government, we have made all arrangements in the grain markets for the farmers. Special inspections were done by the teams constituted by the state headquarters against the hoarders. I appeal to the farmers who have not yet sold their produce, to come to grain market to sell it,” said Anish Yadav, Deputy Commissioner, Karnal.