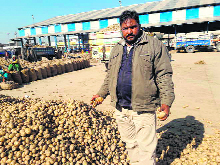 A potato glut in Haryana’s markets, its crashing prices and farmers at the receiving end — that is the long and short of the potato story this season in the midst of the ongoing farmers’ agitation against the Centre’s three “black laws”. The potato price has crashed from Rs 3,400 per quintal to Rs 700 per quintal in a month and could fluctuate further.

The agri laws offer no mechanism to control the fluctuating prices, admits Haryana’s Agriculture Minister JP Dalal. He says the prices could dip further in the coming days and that there is no “instant” remedy.

The lack of storage facilities, processing units and market intelligence to grow the in-demand crops and the absence of MSP weigh the farmer down. However, Dalal maintains that the three agri laws will benefit such farmers “indirectly” in the long run.

“The laws do away with the bar on stocking commodities, allowing the farmer to hold on to the produce till he gets a remunerative price. Besides, the law on contract farming allows the end-user to purchase the crop,” Dalal said, adding improved storage and processing units will address the problem partially and this is not possible without private players.