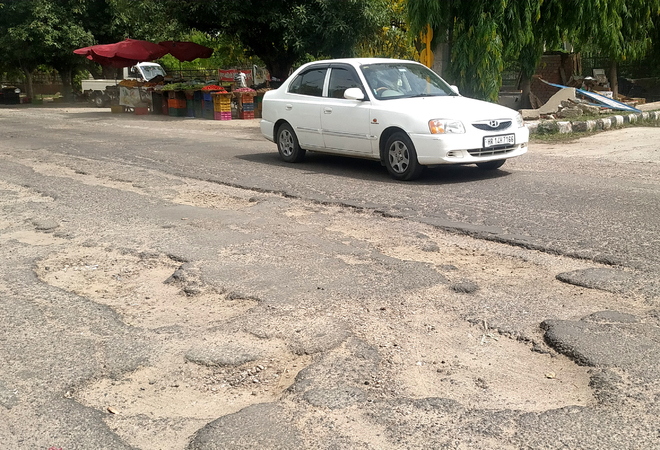 The main road outside the Gymkhana club in Rohtak. Tribune Photo

Residents led by Hemant Bakshi president, Rohtak Social Welfare Society, today submitted a memorandum to Deputy Commissioner Manoj Kumar and raised the issue of potholes on main roads in the city. They demanded that the roads be repaired as soon as possible as these had led to many road mishaps.

“All outer roads in the city have developed big potholes giving a harrowing time to commuters. Several road accidents have occurred due to the potholes in the past some days, but the authorities are turning a blind eye to it. Now, the people are left with no option but to hold demonstrations. So before doing so, we have urged the DC to resolve the issue, who has assured us of taking prompt action in this regard,” said Bakshi,.

He maintained a tractor-trailer met with an accident near Sunaria Chowk last week due to a deep pothole. The driver suffered injuries in the accident while the tractor also got damaged. Such accidents had become a routine in the city and the authorities were yet to take action, he added.

‘The Tribune’ had also highlighted the issue in these columns on June 2 and exposed the poor condition of a main road passing outside the Gymkhana club in HUDA Sector 4, a stretch of Delhi road from Tilyar Lake and IMT Chowk and the Jind-Gohana link road.