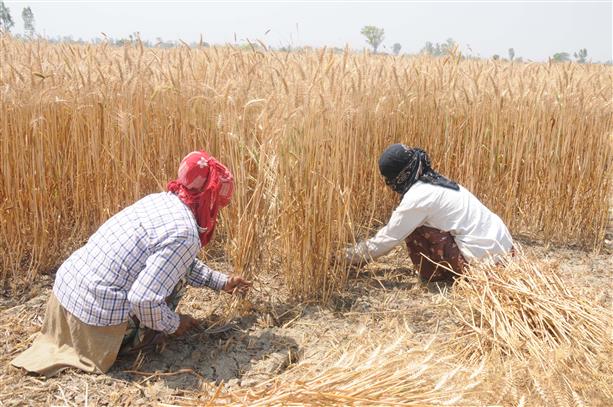 The beginning of the procurement season has brought cheer to local wheat growers as private traders are buying their produce in the local grain market at rates above the minimum support price (MSP).

Ambala: Demanding a bonus of Rs500 per quintal for wheat crop, the Bhartiya Kisan Union (Charuni) chief Gurnam Singh Charuni has announced to free the toll plazas for three hours across the state from 10 am to 1 pm on April 9. Gurnam Singh called the farmers of Haryana to free the toll plazas across the state and submit a memorandum of demands to the officials concerned after calling them on the toll sites. He asked them not to close the roads. TNS

Around 3,000 quintals of wheat arrived at the market in the past week, but just 35 quintals have so far been procured by the government agency at MSP of Rs 2,015 quintal. The other purchases have been made by private traders.

Rewari grain market registered the highest price of wheat in this procurement season on Wednesday when the produce was bought by a private trader for Rs 2,080 per quintal. Earlier, it was being sold in the open market for Rs 2,025-Rs 2,070 per quintal.