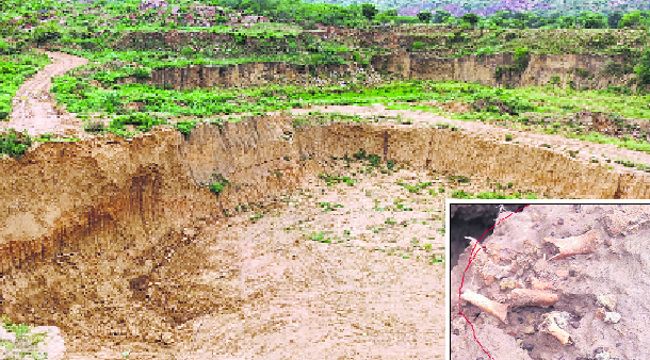 The site of illegal mining at Tauru; and (inset) bones exposed due to mining at Sultanpur village.

While only stone quarrying seems to be grabbing the entire attention these days, illegal sand mining is a huge problem in Mewat villages. Deep craters are a common sight in many villages, but things have gone a bit too far in Sultanpur village of Punhana block.

Hundreds of lives in Sultanpur village and thousands in Nuh are at risk, but the government doesn’t even recognise the problem. Javed, Social Activist

Illegal digging of soil has destroyed the burial ground in the village, exposing skeletons and bones at many places. A 50-foot-deep crater has been created, which gets filled with water during the monsoon, posing threat to local residents.

“Not only the mining mafia, but also the locals are involved in illegal digging here. This has converted several hillocks into deep craters. On many occasions, people involved in illegal mining suffer injuries and some even get buried alive due to sudden caving in of soil. We have been facing a crisis since 2018, but nobody has cared to deal with the issue,” said advocate Javed, who is also a social activist. Since 2018, Javed has approached several platforms, including the CM’s window, but to no avail. “Hundreds of lives in this village and thousands in Nuh are at risk, but the government doesn’t even recognise the problem. We need a strict implementation of laws to save the Aravallis,” he said.

In January, four women were buried alive while mining sand at Kangarka village in Tauru block.