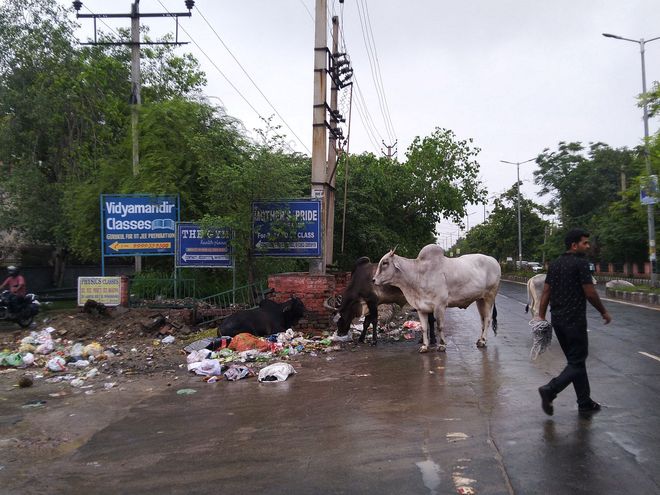 Stray cattle can be seen everywhere in Rohtak town. These animals pose serious threat to the lives of passersby and commuters. The elderly and children hesitate to get out of their homes. These animals defecate everywhere leaving the roads filthy. Stray cows search for food in garbage dumps and in the process eat polythenes which may result in their death. So the department concerned must take note at the earliest and remove the stray animals from the roads

Administration should deal sternly with encroachers

Shopkeepers, dhaba owners, those selling sand, gravel and running other commercial activities have encroached upon major portion of roads in Kaithal, Kalayat, Cheeka, Rajound and Pundri towns thus leaving the roads congested. The Ambala road in Kaithal, the road users and pedestrians find it very inconvenient to move on such congested roads. The inaction by the administration and departments concerned has given leverage to such encroachers who have no respect for law. The administration should deal sternly with encroachers.

Garbage dots every nook and corner of vegetable market

Despite tall claims made by the Kurukshetra administration regarding upgrading of Kurukshetra in the ranking among the clean cities of Haryana, the reality is far from truth. The New Vegetable Market on Salarpur Road tears into Swachhata Abhiyan. Stinking slush and heaps of rotten fruits and vegetables on both the sides of its entrance give a nauseating feeling. Pigs can be seen eating from the heaps of garbage in every nook and corner of the market. It appears that no cleanliness drive ever takes place here. Accountability needs to be fixed by the administration so that it can be a clean place where people can move around and buy fruits and vegetables.