Roads chock-a-block, commuting in Gurugram a nightmare : The Tribune India 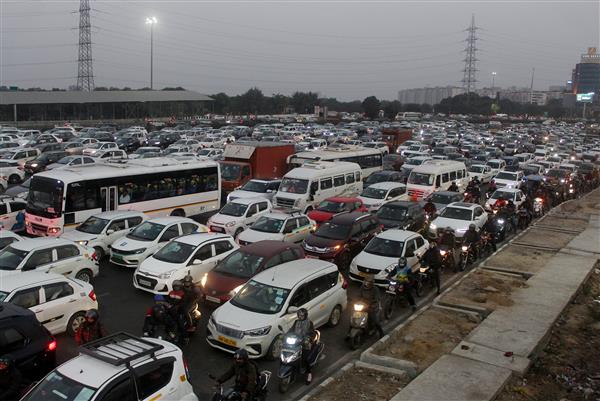 Crawling vehicles, blaring horns and choked roads — traffic congestion is at its worst in Gurugram, seen as Haryana’s show-window, with commuting even small stretches taking several hours during morning and evening rush.

According to information, more than 30,000 new vehicles are registered annually in the four sub-divisions in the district — Gurugram, Badshahpur, Sohna and Pataudi.

On an average, about 10.50 lakh vehicles crossed the Gurugram-Delhi border daily in 2022, a count that stood at 6.80 vehicles in 2021, as per data gathered from the Gurugram traffic police.

30,000vehicles registered per year in 4 sub-divisions in Gurugram district

The growing load of vehicles has been translating into long traffic jams at the busiest crossings in the city — IFFCO, Hero Honda and Rajiv chowks — while bumper-to-bumper driving has become a norm at the district’s border points with Delhi. The Old Railway Road, New Railway Road and the area around the bus stand are among points that always remain choked.

Maintaining that it takes him 45 minutes every day to cross a 200-metre stretch in Udyog Vihar, Col Raj Singh says, “We have three sector roads and a peripheral road that need to be widened urgently. Tenders were floated, but there has been no headway since. The roads should be widened and moreunderpasses must be constructed.” Ashok Yadav, who lives in Sector 38, says two sectors adjoining his residence house three big hospitals and other institutions. “Traffic jams are a routine. The government must explore ways to tackle the growing number of vehicles,” he says.

Stating that no planning has gone into preparing the road network for the rising traffic, Yadav, also the RWA president, says the residents have been left to fend for themselves. “The vehicle density has increased manifold and the shortcomings in the infrastructure are not being dealt with. Commuting in the city has become a nightmare,” claims Baljeet Rathee of DLP Qutab Enclave RWA.