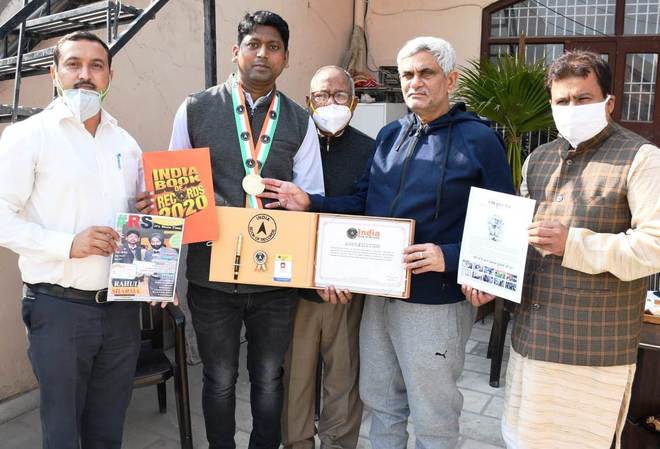 Rohtak: The India Book of Records has felicitated a local lad, Rahul Sharma, with an appreciation certificate and a gold medal for making a magazine resume consisting of 21 pages using Microsoft. He has shared his skills, hobbies, education, experience, inspiration and role model in his resume by using various photographs in an attractive manner. Rahul used to work at a Noida-based multinational company and lost his job during the Covid-induced lockdown. “I got inspiration from Chief Minister Manohar Lal Khattar, who made a statement about converting a crisis into an opportunity. I used my creativity skills and prepared the magazine resume, which helped me get another job,” he said. The CM has congratulated Rahul for his feat through his Twitter handle. Former Minister Manish Grover also honoured him.

Karnal: The National Integrated Forum of Artists and Activists (NIFAA), a social-cultural organisation, with the help of other NGOs of the country has started “Samvedna”, a nationwide blood and plasma donation awareness campaign. The drive commenced with the purpose to organise 1,500 blood donation camps across the country to collect 90,000 units of blood on the 90th Martyrdom Day of Shaheed Bhagat Singh, Rajguru, Sukhdev on March 23. At a meeting of NIFAA members at Vikas Sadan here on Sunday, chairman Pritpal Singh Pannu said apart from the families of the three martyrs, the campaign was getting support from prominent personalities such as famous Bollywood singer, composer and music director Kailash Kher; eminent actor and philanthropist Sonu Sood; noted actor Randeep Hooda, world-famous author Shiv Khera; Punjabi singing legend Gurdas Maan; renowned producer-director Karan Razdan; film, television and theatre actor Mohan Joshi; professional footballer Jeje Lapekhlua; and acclaimed youngest singer Esther Hnamte. In a rare gesture, all organisations joining hand for this blood and plazma donation drive will be given a certificate personally signed by the above mentioned celebrities along with Abhay Singh Sandu, nephew of Shaheed Bhagat Singh; Satyasheel Rajguru, nephew of Shaheed Rajguru; and Anuj Thapar, grandson of Shaheed Sukhdev. Similarly, all blood donors will also get an appreciation certificate.

Rewari: Union Jal Shakti Minister Gajendra Singh Shekhawat bestowed the World Toilet Day Award on the Rewari district administration for raising awareness about access to safe/hygienic toilets and overall relevance of sanitation. Rewari was among the 20 districts across the country selected for this prestigious award. DC Yashendra Singh received the award digitally. “It is a big achievement and the participation of representatives of the Panchayati Raj Institutions, anganwadi workers, social activists and other social groups in the Swachh Bharat Mission (Gramin) have played a vital role in getting this prestigious award,” Yashendra said.

Gurugram: A mobile e-Clinic and nursing unit was launched within the upscale M3M Golfestate condominium in Sector 65. Launched by M3M along with Medanta, the facility will cater to the medical needs of the residents by connecting them with the hospital’s super-specialist doctors through remote consultation. The residents will have access to immediate healthcare advice and treatment while ensuring patient’s safety. The e-Clinic was inaugurated by Pankaj Bansal, M3M director, along with Dr Naresh Trehan, chairman and managing director, Medanta. The e-Clinic has provided the residents of the society with trained medical staff, support for medical emergency and virtual consultations. “The e-Clinic will support medical needs of residents to ensure essential and specialised care for all,” said Pankaj.

Faridabad: The transfer of the Faridabad Municipal Corporation (MC) chief engineer within days of joining the duty has raised a few eyebrows. Birender Kardam, who had joined here as the chief engineer on November 18, was relieved from the post as per an order issued by the office of Additional Chief Secretary, Urban Local Bodies Department, on Sunday. While this has taken the official circles of the MC by surprise, the authorities have ordered to give the charge again to Thakur Lal Sharma, who was transferred from this post on November 16. Sharma who was posted as the chief engineer of the Sonepat MC has now been given the additional charge of Faridabad. “This action has not only put a question mark over the purpose of the transfer in such a manner, but will certainly affect the working of the Faridabad MC,” says Yogesh Dhingra, a former municipal corporator.