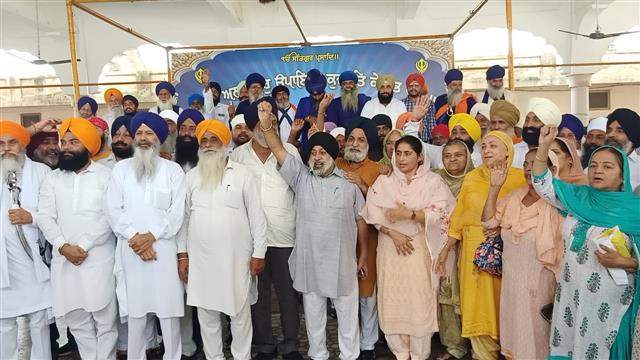 SAD office-bearers and members who quit party in Karnal on Monday. Tribune photo

In a jolt to the Shiromani Akali Dal (SAD), its senior office-bearers from the state quit the party and formed SAD Haryana State today. A five-member committee has been formed by the rebel group to chalk out future strategy.

Bhupinder Singh Assandh, Sukhdev Singh Gobindgarh, Kanwaljeet Singh Ajrana, Gurmeet Singh Trilokewala and Inderpal Singh Karnal are committee members who will have the power to take decisions. The committee members will travel across the state to strengthen the newly formed party.

The rebel group accused the Badal family of exercising full control on the party and promoting nepotism. “After the defeat in recent elections, we requested the Badal family to change the leadership, but our request was not considered. We met party workers and decided to quit. We have formed SAD Haryana State to fight for the rights of the people of Haryana,” said Assandh.

“We will hold a rally in Karnal soon to strengthen the party,” he added. They will also contest Assembly and Lok Sabha elections in Haryana, he said. Parkash Singh Badal and Sukhbir Singh Badal should leave all posts of the party, he said.

Raghujeet Singh Virk, SAD working committee member and senior vice-president of the SGPC, said all units of the party had been already dissolved. “Quitting by these people will not affect the party in Haryana,” he claimed.