Scant regard for Covid norms in Yamunanagar 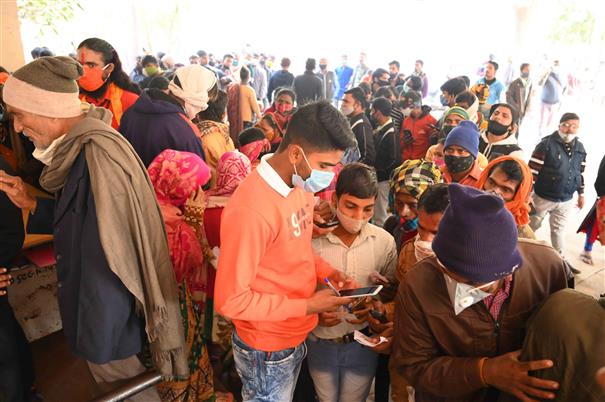 A number of people are neither wearing masks nor maintaining social distancing in public places. File photo

Despite intensified vigil by the administration, residents have been showing scant regard to the Covid protocol. A number of people are neither wearing masks nor maintaining social distancing in public places.

In the past one week, the police have lodged three FIRs against the violators. Meanwhile, the teams of Municipal Corporation, Yamunanagar-Jagadhri (MCYJ), have also issued challans to 140 shopkeepers for not wearing masks in the past eight days.

According to information, the police registered an FIR against 200-250 sacked Physical Training Instructors (PTI) and drawing teachers, when they undertook a “prabhat pheri” (march) on Tuesday morning from the new grain market, Jagadhri, to the residence of Education Minister Kanwar Pal Gujjar allegedly violating the Covid protocol.

The sacked teachers had been sitting on a dharna in the new grain market, Jagadhari, for several days seeking the reinstatement of their jobs. However, after the “prabhat pheri”, the police forcefully lifted the dharna.

On the complaint of Head Constable Ashok Kumar, posted at the Buria Gate police post a case was registered against the sacked PTIs and drawing teachers under Section 188 of the IPC and Section 51 of the Disaster Management Act 2005 at the City police station, Jagadhri, on January 11.

In another instance, a police patrolling team allegedly found a shop of tobacco seller opened after 6 pm near Kanhaya Sahib Chowk in Yamunanagar on January 9. On the complaint of Head Constable Anil Kumar, a case was registered against the accused under Sections 188, 269 and 270 of the IPC and Section 51 of the Disaster Management Act at the City police station, Yamunanagar, on January 9.

Similarly, another police team found a liquor shop opened in Jagadhri after 6 pm on January, 8. On the complaint of Head Constable Rakesh Kumar, a case was registered against an employee of the liquor shop under Section 188 of the IPC at City police station, Jagadhri, on January 9.

As per directions issued by the government, no shops (except those selling essential goods) can remain open after 6 pm in the state.

MCYJ Commissioner Ajay Singh Tomar said their teams had issued challans to 140 shopkeepers in the past eight days for not wearing masks.