Security beefed up at Singhu border 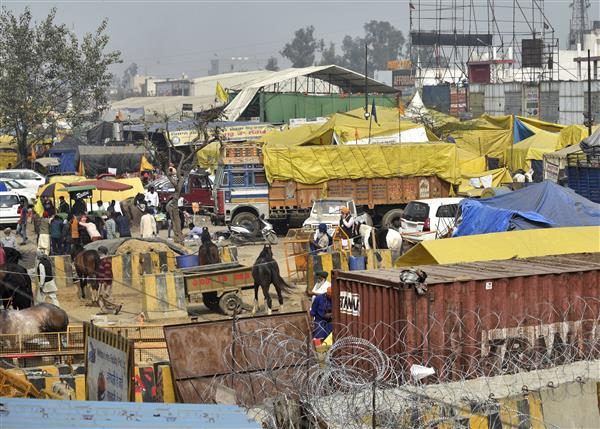 A view of the site of farmers’ agitation against new farm laws at Singhu border, in New Delhi. PTI

In order to avoid any untoward incident at the protest site where farmers are protesting against the three farm laws enacted by the Centre, the police have beefed up the security at Singhu border and adjoining areas.

Around 100 CCTV cameras at both the stages and many locations including the areas outside restrooms earmarked for women protesters have been installed along with heavy deployment of police personnel near the barricades close to the protest site. Two control rooms for monitoring of CCTV cameras have also been set up behind both the stages.

The number of volunteers for security check at every entry and exit gates along the way from Singhu village to Kundli village has also been increased.

“Activities of people moving around are being monitored and volunteers are keeping a close watch on people coming from outside and farmers staying on tractor trollies. Since there are many cuts for entry and exit towards the villages so the volunteers have been deployed at every possible spot. Volunteers are also patrolling on tractors especially after the sun set,” said Maninder Singh, a member of Krantikari Kisan Union in Punjab who is also part of security management at Singhu.

Height of concrete barricades that were setup earlier by Delhi Police close to the protest site (towards Delhi) have been increased by putting barbed wire on them. Whereas barricades put at four spots along the way from Singhu to Singhola village (Delhi-Chandigarh) highway were added with barbed wire after stone-pelting incidents.

Drone cameras are been used by the security forces to monitor the situation. However, Delhi Police personnel along with the paramilitary forces deployed at the protest site have been decreased while the entry of visitors and mediapersons from the main gate is still banned. —IANS