Self-financed colleges in Haryana suffer as Department of Higher Education yet to refund admission fee : The Tribune India 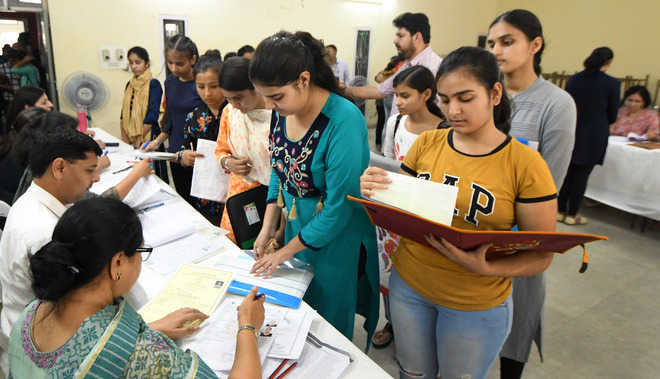 The last date for deposition of admission fee by students appearing in the first merit list was October 8, while those in the second merit list had to clear their dues by October 14. File Photo

Self-financed degree colleges across the state are facing the heat as the Department of Higher Education (DHE) has not refunded the money to them even several days after the deposition of fees by the students figuring in the first and second merit list for the admissions to first year of undergraduate courses.

The colleges are finding it difficult to pay salaries to their staff and bear other expenses. Due to ongoing Covid pandemic, students are bound to make online payments to the DHE account.

“As per guidelines, the DHE was to refund the admission fee to all government-aided and self-financed colleges across the state within 48 hours along with the list of students. Last date for deposition of fee by students for first and second merit list was October 8 and October 14, respectively, but the DHE has not yet refunded the fee to any college,” said Kuldeep Arya, Secretary, Haryana Self-Financed College Association (HSFCA).

He said the delay in refunding the fee had put the colleges in trouble as they were unable to pay the salary of their teaching and non-teaching staff and bear other daily expenses.

A majority of college owners had taken hefty loans for developing infrastructure hence they had been waiting for the fees to repay their loans.

The association has raised the issue before the DHE but the fee was yet to be transferred to the colleges, Arya added.

“It is for the first time when students on getting admission need to deposit the fee online to the DHE’s account and the DHE then will refund the fee to the colleges. Earlier, a challan was generated by the DHE to submit the admission fee and the students deposited the money to the college concerned. So, we are demanding the restoration of the earlier system of submitting fee directly to the college, either online or offline,” said Arya.