India’s cumulative Covid burden on Monday night crossed the grim milestone of 2 crore with 23 states and UTs, including Haryana, Himachal Pradesh, Jammu and Kashmir and Chandigarh, continuing to see a steep daily rise in infections.

After daily cases dropped marginally for a second straight day to settle at 3,68,147, the government said there were early signs of the infection plateauing in 10 states and UTs, including Punjab, Chhattisgarh, Delhi, Madhya Pradesh, Maharashtra, Jharkhand and Ladakh. 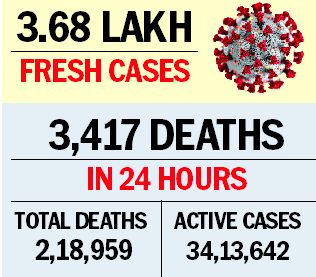 “Plateau of cases is being seen in Punjab, UP, and also Uttarakhand, but these are very early signals. Continued efforts of containment are a must to preserve and build on these gains,” Joint Secretary, Health, Lav Agarwal said.

Twenty-two states still had positivity rate of more than 15 per cent, which was a cause for concern, the Health Ministry said, reiterating that states with districts that had more than 10 per cent positivity rate should consider local lockdowns for 14 days to start with.

The government said two lakh people aged 18 to 44 years had been inoculated so far with 12 states having commenced the adult vaccination drive that began from May 1.