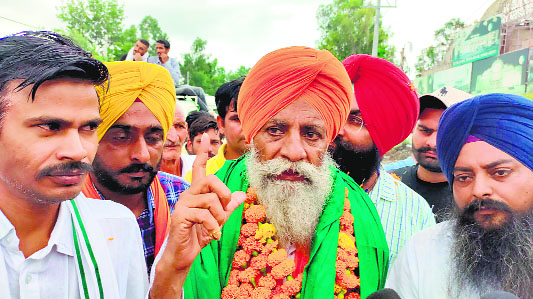 Enraged over the controversial remarks of Bhartiya Kisan Union (Mann) state president Guni Prakash about the turban and beard of BKU (Charuni) chief Gurnam Singh Charuni, members of the Sikh community today held a demonstration. They sought registration of an FIR against Guni Prakash and other union activists.

They have also served an ultimatum of holding a mahapanchayat if Prakash is not arrested by July 28.

Members of the Sikh community held a meeting at Gurdwara Chhevin Patshahi in Kurukshetra, took out a march and submitted a memorandum to the District Development and Panchayat Officer (DDPO) for the President at mini-secretariat in support of their demand. Later, they also submitted a police complaint. The community leaders said that they would accept the apology from Prakash only if he accepts his mistake in any gurdwara.

Prakash has been critical of Gurnam Singh Charuni and, during a protest in Kurukshetra on July 22, he had made a controversial statement against the BKU (C)leader.