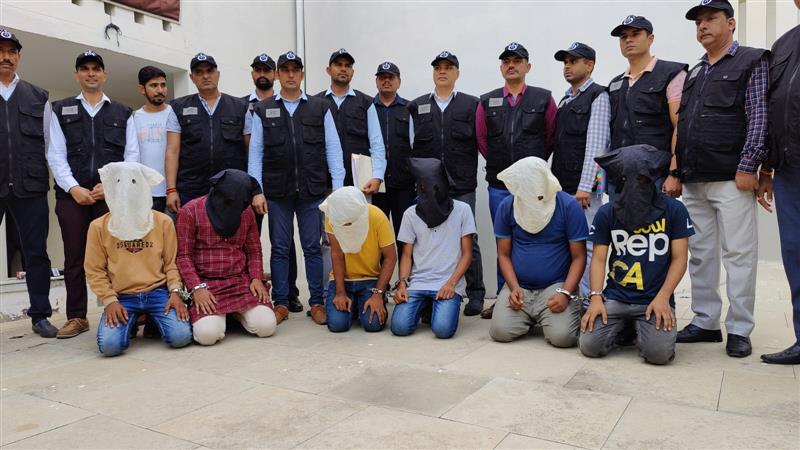 Haryana STF has busted a six-member gang that was issuing threats to MLAs of the state.

Four MLAs had so far moved police complaining about threat calls. They had allegedly received death threats and extortion calls from multiple phone numbers traced to middle-eastern countries between June 24 and June 28.

FIRs were lodged against these threats and the investigation was assigned to STF (Headquarters) by Haryana DGP PK Agrawal.

According to STF IG B Satheesh Balan, technical analysis of these mobiles has confirmed that these numbers are registered in the Middle Eastern countries and were being operated from Pakistan.

Some former MLAs of Punjab had also received similar threats from these numbers. Different tones and styles like Mumbaikar tone and Punjabi language were used during conversation with MLAs.

“We had formed an SIT to investigate these cases. The two-week operation was personally monitored and supervised by DGP, Haryana. STF conducted a technical analysis of these mobile numbers and IP addresses. This involved five separate teams working on this technical analysis.

“While working on this link, the STF (H) prepared a strategic plan through which the STF (H) team started receiving these threat and extortion calls. The STF (H) accordingly asked the account number and mobile numbers to complete the transaction with the extortionists. “To track these account numbers, two parallel teams conducted raids across Mumbai and Muzaffarpur, Bihar,” said IG Balan.

Two members of this gang identified as Dulesh Alam and Badre Alam were arrested from Mumbai. They were found in the possession of approximately 20 Passbook/Cheque Books, 18 ATM cards, 14 fake SIM cards, 1 diary and 5 mobile phones.

It was found that these culprits often enticed poor or common people by offering Rs 15,000-20,000 and convincing them to open bank accounts and would then keep all the documents (Passbook/Cheque book/ATM Card/ATM pin) with themselves and would buy fake SIM cards to operate these accounts.

During these raids, the Mumbai Police Crime Branch, STF Bihar and Bihar Police offered complete support to STF (H). While interrogation, the STF (H) found approximately 10 Pakistani residents through whom the threats and extortion were routed.

“These accused do not belong to any criminal gang or terrorist organisation. This in fact is a gang of very sharp criminals who are involved in professional fraud, money laundering and have their members across Pakistan, Middle East and India. People sitting in other countries would entice victims by making calls in the name of “Kaun Banega Crorepati” or lotteries or by extortion calls and would make them transfer money to the account numbers given by Dulesh or Amit. Dulesh and Amit then either withdraw this money via ATMs or would transfer this amount to the Indian accounts of their Pakistan-based gang members,” said B. Satheesh Balan, IG of STF, Haryana.