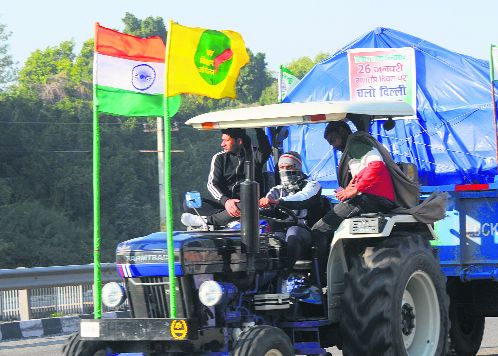 Farmers on their way to the Singhu border on Thursday. Sayeed Ahmed

The stark difference is hard to miss. Before the farmers’ protest, SUVs, cars, buses and trucks plied on the National Highway-44, one of the busiest roads in the country. Now, a tractor-trolley can be seen crossing the highway after every three to four minutes — farmers either on their way to Delhi border to join their brethren or returning home in Punjab.

The increased movement of tractor-trailers comes ahead of farmers’ parade in Delhi on the Republic Day.

This reporter spent an hour on the NH-44 and found that around 100 tractors crossed Karnal today afternoon.

Meanwhile, scores of farmers from Punjab reached Karnal on tractors bearing the national flag and the flag of farmer unions. After a short stay near Karan Lake, they left for the Singhu border.

They said all farmers owning tractors in their villages would participate in the January 26 parade.

“We are going to participate in the Republic Day parade on tractors to oppose the Centre’s new farm laws. Almost all tractors of our areas will take part,” said 35-year-old Navdeep Singh, a farmer from Ludhiana district.

Another farmer Gurbachan Singh from Amritsar said, “Hundreds of tractor-trailers leave for the Delhi border daily. The tractor parade will be peaceful. It will give the message to the Centre that farmers are united on their demand of getting the laws repealed.”

Amrik Singh, another farmer from Moga district, said they were demanding nothing, but revocation of the laws. “We did not ask the Centre to frame these laws. The Centre has imposed them on us, forcing us to protest.”