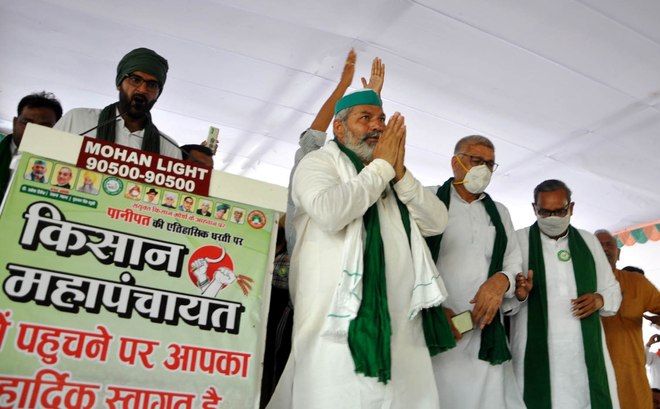 On the eve of the Bharat Bandh call by the Samyukt Kisan Morcha (SKM), farmer leader Rakesh Tikait has appealed to youth to counter the “misinformation campaign” against the protest, which has completed 10 months.

Highways to be blocked

“The IT cells of the corporate sector have been spreading fake news about the farmers’ protest. The only way to counter them is to run our own campaign. The youth must take this responsibility. It is important to present reality on social media,” he said while addressing farmers at a “kisan mahapanchayat” in the new grain market here today.

Ready to agitate for 10 years

The farmers’ agitation has completed 10 months. The government must listen with open ears that even if we have to agitate for 10 years, we are ready. The Centre will have to repeal the laws. —Rakesh Tikait, BKU leader

Police up for challenge

Elaborate arrangements have been put in place by the civil and police administration. The primary objective is to maintain peace and order, prevent violence and facilitate the functioning of traffic and public transport systems across the state. —Haryana Police spokesman

Protest within ambit of law

Everyone has a right to raise their voice within the ambit of the law. The government has no problem with that, but nobody will be allowed to take the law into their hands. — Manohar Lal Khattar, CM

The farmer leader further said the Centre and the state government had tried to defame the protest by spreading lies, but farmers remained united. “The condition of farmers in several states is bad and the SKM is fighting for their rights.”

On the blockade of the Delhi national highway, Tikait said, “The Delhi Police and the Central Government, not the farmers, have blocked roads.”

Tikait also said the protest would not end until the three controversial farm laws were repealed. “There is no doubt that the SKM will win. It will be a win of youth and women.”

Farmer leader Gurnam Singh Charuni said: “The police have booked more than 40,000 farmers in criminal cases. Summons have been issued. I appeal to farmers not to court arrest if the police visit their villages with the arrest warrant.”

Grain markets to be shut today

Hisar: The Haryana Beopar Mandal on Sunday announced that grain markets in the state would remain closed on Monday in support of the Bharat Bandh call by farmers’ organisations. State mandal president Bajrang Garg said, “Traders support farmers. Arhtiyas have a family bond with farmers. We cannot leave them in the times of crisis.” He added the farmers’ demand for the withdrawal of three controversial agricultural laws was justified. TNS