'Temple' built in Yamunanagar to keep memories of martyrs alive : The Tribune India

'Temple' built in Yamunanagar to keep memories of martyrs alive 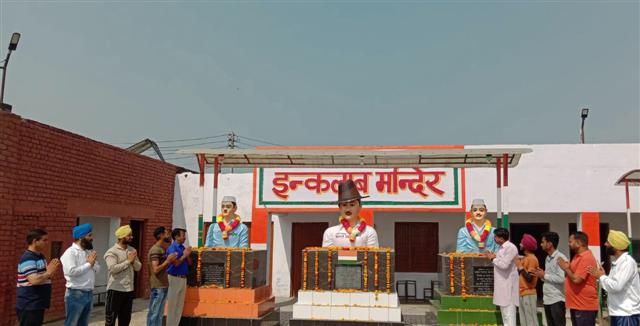 A unique temple has been built at a village in Yamunanagar district to keep alive the stories of freedom fighters for young generations of the country. Instead of putting gods’ idols, statues and portraits of the fighters (from 1857 to 1947) have been installed in the temple.

Here, the way deities are worshiped in the temples of the country, the freedom fighters are remembered by paying them homage and saluting them in this temple every day.

The name of the temple is “Inquilab Mandir” and it was constructed by Inquilab Shahid Samarak Charitable Trust, founded by advocate Waryam Singh in Gumthala Rao village.

“The construction work of the Inquilab Mandir had been started with the installation of the statue of Shahid Bhagat Singh on September 27, 2000. We have so far installed 11 statues and put up 200 portraits of the fighters of freedom struggle in the temple,” said advocate Waryam Singh.

“Besides giving respect and paying homage, the purpose behind constructing the temple is to keep the stories of martyrdom of freedom fighters alive among young generation of the country,” said Waryam Singh.

Advocate Amarjit Singh, an active member of the Inquilab Trust, said the heroes of freedom struggle were remembered by most of the countrymen every year only on the occasion of “Martyr Day” on March 23, but in the Inquilab Mandir, they are paid homage and saluted every day.

Waryam Singh demanded that the freedom fighters, who participated in freedom struggle of India from 1857 to 1947, should be given the status of martyrs by the government.

“Our country is celebrating 75 Azadi Ka Amrit Mahotsav, but no government has legally given statues of martyrs to fighters/persons who gave martyrdom for the freedom of the country from 1857 to 1947. No government tried to find their families and gave them facilities being given to the family members of martyrs who got martyrdom after 1947,” says Waryam Singh.