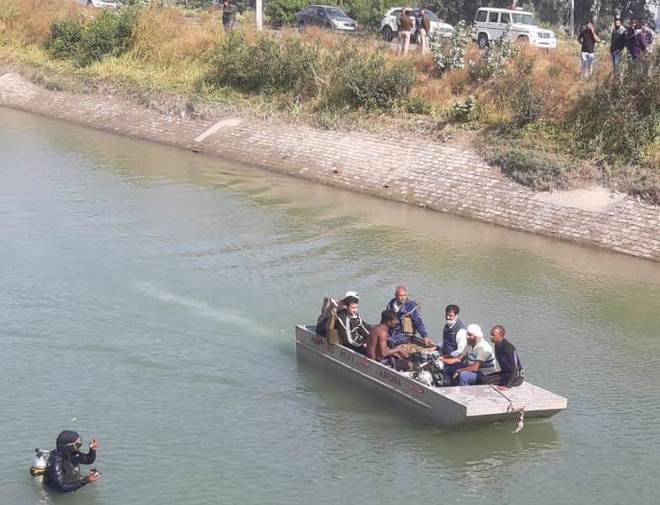 A team of divers during the search operation in Panipat on Saturday.

Even after three days, the jumping of senior BJP leader and former councillor Harish Sharma into a canal reportedly to commit suicide due to the alleged pressure of the police has been puzzling the SIT, his family members and people of Textile City.

The investigation being conducted by the SIT could not be concluded till Saturday evening and the SIT may seek more time for it. The Home Minister has directed the SIT to submit a report within two days.

Though the police and administration continued search operations to trace the BJP leader on the consecutive third day on Saturday, no clue was found till the late evening.

The administration has called special divers from Kurukshetra Development Board (KDB) and a team of divers from Patiala in Punjab.

The SIT also collected footage of CCTV cameras installed on buildings near Harish’s house on Saturday.

The police had booked former councillor Harish Sharma, his councillor daughter Anjali Sharma along with eight other persons allegedly for selling crackers and assaulting policemen on Diwali night.

The SIT constituted by Home Minister Anil Vij and headed by ADGP Sandeep Khirwar, IG Rohtak range, along with members SP Rohtak Rahul Sharma and ASP Gohana Udai Singh Meena have been camping in Panipat for the past two days to investigate the incident.

Pramod Vij, MLA, said that Harish was a fearless leader and he was never bothered about anyone. Whatever has happened would be clear after the SIT’s investigation, he said.

SIT chief ADGP Sandeep Khirwar said that the investigation into the incident is under way. We are putting in our best efforts to search the former councillor, the ADGP said.