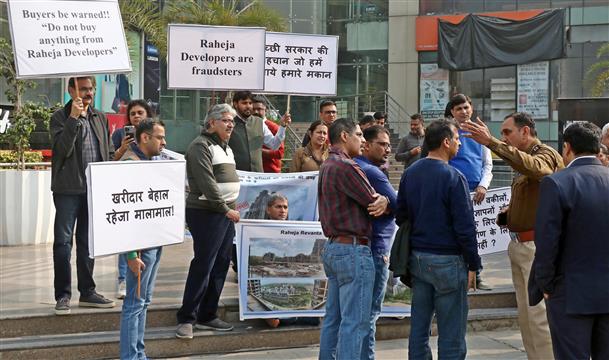 The buyers of Raheja Revanta project in Sector 78, waiting for possession for five years, staged a protest outside the office of Raheja Developers on Sohna Road today. Builder Nayan Raheja reached the site and tried reassuring the protesters with folded hands.

It was later decided that a meeting between buyers and builders would be held every three months. The buyers alleged that even after giving 90 per cent money for the flat, they were being misled. The police also reached the spot.

Arjun, president of Revanta Gurgaon Flat Buyers Association, said the flats were sold in the name of the tallest project in Delhi, NCR and Haryana. The buyers bought the flats for Rs 1 to 5 crore, added Arjun.

“The project licence expired on May 31, 2021, following which Haryana Real Estate Regulatory Authority ordered the builder to refund the money of 65 buyers but the latter did not comply with the order,” said a protester, Arun Kumar.

“Orders have already been issued by the National Consumer Disputes Redressal Commission for the arrest the five directors of the company,” said buyers Dinesh Joshi, Harish Goyal and Kunal Kapoor.

In a press statement, Dimple Bhardwaj, spokesperson for Raheja Developers, said they were aggressively taking up the issue of basic infrastructure with the government.

“We cannot risk the lives of around 1,000 families by allowing them to stay in the society campus without basic infrastructure and facilities. We are yet to complete the land acquisition process for the road therefore, the construction of 33 KV sub-station and water-supply arrangement are not in place,” added Bhardwaj.