Wheat arrival down 58% in Hisar district 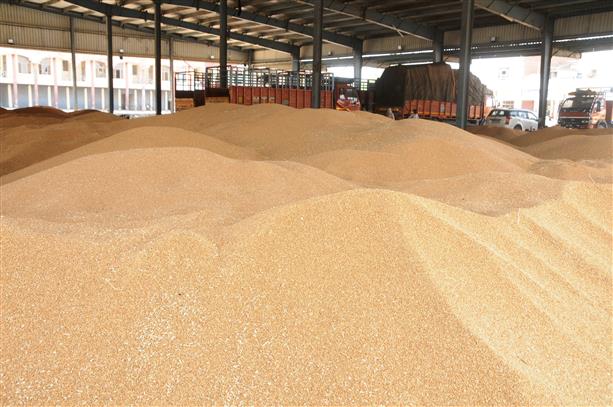 This season, farmers have been slow in bringing their wheat produce to the grain markets due to low yield and expectations of a jump in wheat prices.

I got 35 quintals per acre this season which is about five quintals lower than average production. The sudden arrival of summer has prematurely ripened the wheat crop. As a result, the weight of the grain has reduced. Rohtash, Agroha Farmer

The wheat arrival in the grain market is down by 58 per cent in Hisar district as compared to the corresponding period in the previous year.

The farmers said that wheat prices are likely to go up in the next few weeks. So, they are stocking the new produce as of now. The international market has high demand for wheat from India due to the Russia-Ukraine war.

Wheat traders and exporters are expected to offer higher prices for the wheat stock, maintained farmers.

Kuldeep Kundu of Pabra village in Uklana block, who had harvested crop on two acres, has stocked 36 quintals of wheat at home. “The prices are going up and I expect that it can touch Rs 2,500 per quintal soon. I will also keep the produce of another four acres as I have enough space,” he stated.

Kundu also added that wheat production had come down by four quintals per acre.

Another farmer Rohtash of Agroha too stated that he had produced 35 quintals per acre this season which is about five quintals lower than average production. “The sudden arrival of summer has prematurely ripened the wheat crop. As a result, the weight of the grain has reduced,” he added.

Rohtash said that irrespective of whether exporters have demand or not, wheat prices are set to go up due to low yield. “If I can store the wheat for a couple of months, it will pay rich dividends for sure,” he maintained.

The market price of wheat being tracked by the officials also indicated higher prices. “Traders are offering Rs 2016 — one rupee higher than the MSP of Rs 2015 — to Rs 2021 per quintal. It means that the traders need not send the produce to government agencies. Obviously, the traders are also stocking the produce.”