Owing to poor air in NCR, state directed only 1/3rd units to operate 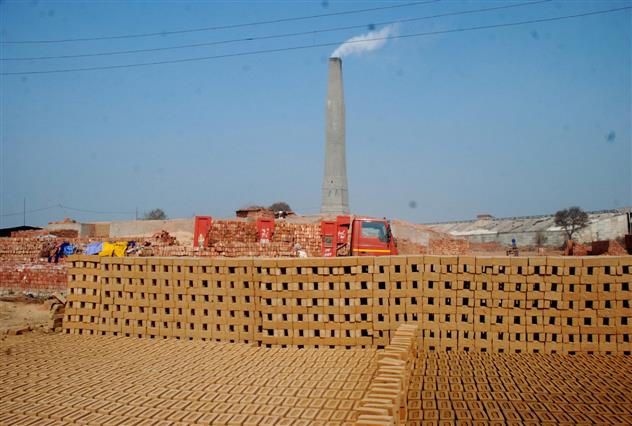 A brick-kiln in Jhajjar. File Photo

Brick-kiln owners and the state government are at loggerheads over the latter’s directive to run one-third kilns in the district in view of the National Green Tribunal (NGT) order regarding air quality index in the National Capital Region (NCR).

The govt has directed to let merely one-third kilns operate this year. But we will not follow the directives as those will render the remaining two-thirds kiln owners unemployed. — Mahabir Gulia, President, dist brick kiln owners association, Jhajjar

The kiln owners have refused to follow the directives citing financial losses and also approached the Supreme Court pleading that it should allow all kilns in the NCR to operate in the upcoming production session commencing from March 1. Jhajjar district has 368 licensed brick kilns.

“A hefty amount is invested before starting operations at a brick-kiln. All owners have already invested heavily by taking loans for buying tractors and other machines. The government has directed the district authorities to let merely one-third kilns operate this year for which draw system is to be adopted. But we will not follow the directives as those will not only render the remaining two-thirds kiln owners unemployed but also cause them a heavy loss,” said Mahabir Gulia, president, District Brick Kiln Owners Association, Jhajjar.

He maintained the loan was repaid from the income from the kilns. The owners would be ruined if they do not operate the kilns this year. Migrant labourers would have to either engage in other works or go back home. Hence, they were demanding exemption from the directives this year.

“We will adopt the system from next year as two-thirds kiln owners will not invest in this business. But the district authorities are gearing up to hold a draw to finalise those one-third kilns which will remain operational this year. A joint case has been filed in the Supreme Court by all kiln owners of NCR to get relief,” said Gulia.

JP Saini, Inspector at District Food and Supply Controller office, said as per the state government’s decision, a total of 123 (one-third) kilns were to be run in the district this year. The operation of the remaining 245 kilns would remain suspended.

“The date to hold a draw for selecting 123 kilns had been scheduled twice in the past few months, but kiln owners did not turn up on both occasions. As the kilns will start on March 1, we are in the process to finalise the date for another draw,” Saini added.