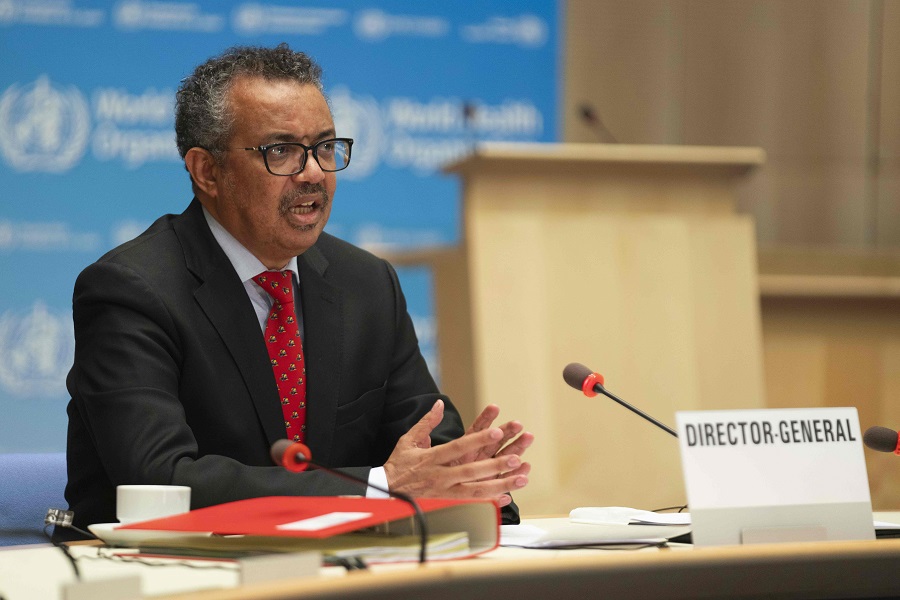 WHO Director-General Tedros Adhanom Ghebreyesus attending the 147th session of the WHO Executive Board held virtually by videoconference, amid the COVID-19 pandemic, caused by the novel coronavirus, on Friday. AFP

The coronavirus pandemic is interrupting immunisation against diseases, including measles, polio and cholera that could put the lives of nearly 80 million children under the age of one at risk, according to a new analysis from the World Health Organization and partners.

In a new report issued on Friday, health officials warned that more than half of 129 countries where immunisation data were available reported moderate, severe or total suspensions of vaccination services during March and April.

“Disruption to immunisation programmes from the COVID-19 pandemic threatens to unwind decades of progress against vaccine-preventable diseases like measles,” said WHO Director-General Tedros Adhanom Ghebreyesus in a statement.

The report was also produced by the UNICEF, the Sabin Vaccine Institute and the GAVI.

The UNICEF reported a significant delay in planned vaccine deliveries due to lockdown measures and a dramatic reduction in the number of available flights. More than 40 of Africa's 54 nations have closed their borders, though some allow cargo and emergency transport.

In April, WHO and partners reluctantly recommended a temporary halt to mass polio immunisation campaigns aimed at eradicating the paralytic disease, recognising the move would lead to a resurgence of the highly infectious, water-borne disease.

Wiping out polio requires that more than 90 per cent of children be immunised, which is typically done in mass campaigns involving millions of health workers that would break social distancing guidelines needed to stop the spread of COVID-19.

More than a dozen countries in Africa have reported polio outbreaks this year, all caused by a rare mutation in the virus contained in the vaccine. Health officials had originally hoped to eradicate polio by 2000.

“We have effective vaccines against measles, polio and cholera. While circumstances may require us to temporarily pause some immunisation efforts, these immunisations must restart as soon as possible or we risk exchanging one deadly outbreak for another.”

WHO said it would issue advice next week to countries on how to continue providing vaccination services safely during COVID-19. AP