The study found that 21 doctors out of 56, who had taken at least one dose of the vaccine, either remained asymptomatic or developed one of the mild symptoms 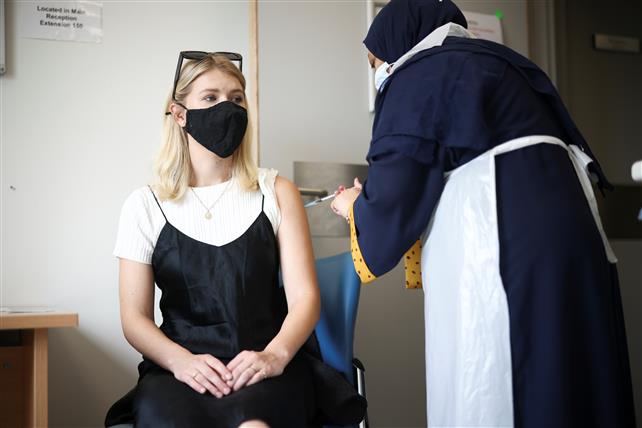 A study conducted by the King George’s Medical University (KGMU) here on 56 resident doctors who got infected twice in a gap of 5-6 months, has revealed that even a single dose of vaccine can provide a shield against severe illness after contracting Covid.

The study found that 21 doctors out of 56, who had taken at least one dose of the vaccine, either remained asymptomatic or developed one of the mild symptoms—sore throat, fever or cough. The mild symptoms also subsided within 3-4 days.

Of these 21 residents, 16 had taken one dose while five had completed the two-dose course.

Medical superintendent, KGMU, Dr D. Himanshu said, “Studies done earlier have already proved that antibodies start developing within 2-3 weeks after vaccination. In this study, it appears that antibodies prevented resident doctors from developing profound symptoms or falling severely ill.” However, Dr Himanshu added that more extensive study was required to find out what could be the other reasons that prevented severe illness because there was a possibility that antibodies developed during the first infection in some of the residents were still functional when they got infected for the second time.

KGMU vice-chancellor Lt. Gen. Bipin Puri, who commissioned this study, had also got reinfected with Covid after vaccination.

“I only had mild fever and sore throat that subsided within three days, though the RT-PCR test kept showing positive results for 10 days. It has been seen that in most cases, antibodies develop after a vaccine shot and reduce severity significantly in case a person is infected after taking the dose,” he said.

Former head, microbiology, IMS-BHU, Prof. Anil Kumar Gulati said, “Maximum protection against the virus comes by antibodies generated after both vaccine shots. But after a shot, enough antibodies are generated to fight against the virus. Even after the change in strains of the virus, vaccines have been found to be effective. IANS