As far as the choice of the test is concerned, rapid antigen test is listed first followed by RT-PCR or TrueNat or CBNAAT as the second option 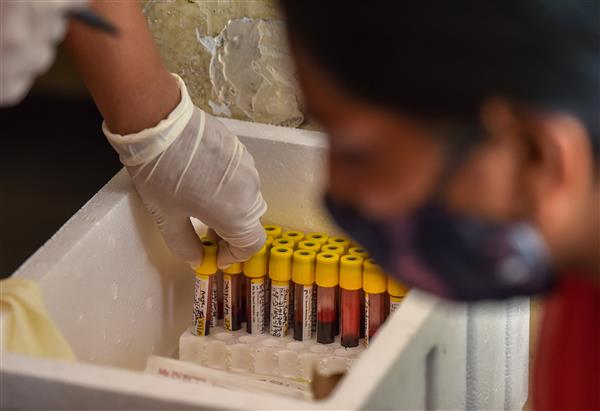 The Indian Council of Medical Research (ICMR) has issued an advisory on COVID-19 testing strategy, allowing ‘testing on demand’ for individuals but left it to states to modify the approach as per their discretion.

It also advised testing on demand for “all individuals undertaking travel to countries or Indian states mandating a negative COVID-19 test at the point of entry”.

The ‘Advisory on Strategy for COVID-19 Testing in India’ (version VI), issued on Friday, said the state governments could simplify the modalities to facilitate testing on demand.

It also suggested that 100 per cent of people living in containment zones should be tested by rapid antigen tests, particularly in cities where there has been a widespread transmission of the infection.

The ICMR also stressed that no emergency procedure (including deliveries) should be delayed for lack of tests and pregnant women should not be referred for a lack of testing facility.

Further, the existing recommendations related to testing for COVID-19 have been extended, elaborated and divided into four parts — routine surveillance in containment zones and screening at points of entry, routine surveillance in non-containment areas, hospital settings and testing on demand — and choice of test (RT-PCR, TrueNat or CBNAAT and rapid antigen tests) in order of priority has been listed.

Under the category of ‘routine surveillance in containment zones and screening at points of entry’, the advisory recommended testing of all asymptomatic high-risk individuals (people above 65 and those with co-morbidities etc) in the containment zones.

Besides, it advised testing all symptomatic (ILI symptoms) cases, including healthcare and frontline workers. All asymptomatic direct and high-risk contacts (in family and workplace, people aged 65 and above, those who are immunocompromised or have co-morbidities) of a laboratory-confirmed case are to be tested once between day 5 and day 10 of coming into contact.

As far as the choice of the test is concerned, rapid antigen test (RAT) is listed first followed by RT-PCR or TrueNat or CBNAAT as the second option.

“Ideally, it is suggested that 100 per cent people living in containment zones should be tested by RAT, particularly in cities where there has been a widespread transmission of infection,” the advisory said.

Under the category of ‘routine surveillance in non-containment areas’, the advisory recommended testing all asymptomatic high-risk contacts (contacts in family and workplace, people aged 65 and above, those with co-morbidities) with RAT being the first choice of test in order of priority.

Under the category ‘hospital settings’, the advisory recommended testing all patients of Severe Acute Respiratory Infection (SARI), all symptomatic (ILI symptoms) patients presenting in a healthcare setting, asymptomatic high-risk patients who are hospitalised or seeking immediate hospitalisation such as immunocompromised individuals, patients diagnosed with malignant diseases, transplant patients, patients with chronic co-morbidities and people aged 65 and above.

It also suggested testing for asymptomatic patients undergoing surgical and non-surgical invasive procedures (not to be tested more than once a week during hospital stay) and all pregnant women in or near labour who are hospitalised for delivery.

The ICMR stressed that no emergency procedure (including deliveries) should be delayed for lack of test and pregnant women should not be referred for a lack of testing facility. It added that all arrangements should be made to collect and transfer samples to testing facilities.

Mothers who test positive for COVID-19 should be advised to wear a mask and undertake frequent handwashing while handling their baby for 14 days. They should also be advised on breast cleaning before feeding the neonate.

These measures are likely to reduce transmission of COVID-19 to their babies, the document said.

If symptoms develop following a negative RAT test, a repeat RAT or RT-PCR should be done.

Home quarantine for 14 days is recommended for all individuals before undergoing elective surgery to minimise chances of infection before the procedure. PTI