Company revealed its fourth quarter earnings and revenue projections for 2022 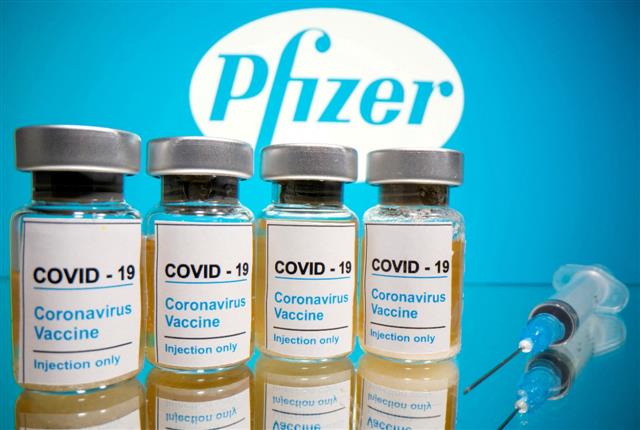 Vials with a sticker reading, ‘Covid-19 / Coronavirus vaccine / Injection only’ and a medical syringe are seen in front of a displayed Pfizer logo in this illustration. Reuters file photo

Pfizer estimates that it will rake in record-breaking earnings of more than $100 billion this year due to sales of its Covid-19 vaccine and antiviral pill to treat the virus, Daily Mail reported.

The rollout of the vaccine has already led to a substantial financial windfall for the New York City-based company, and the prospect on enhanced distribution of Paxlovid, the potential rollout of Omicron-tailored vaccines and more booster shots in the future will lead to an influx of even more cash.

On Tuesday, the company revealed its fourth quarter earnings and revenue projections for 2022 where it said it estimates it will earn up to $102 billion in sales next year, which would be a new record.

More than half of those earnings will be of its two Covid products, with the vaccine expected to bring in $32 billion in sales, and Paxlovid expected to earn $22 billion.

But despite the record earnings estimates, the drug maker posted mixed fourth-quarter results when it comes to actual revenue, with shares down 5.4 per cent in early morning trading. Shares were down 2.84 per cent by closing, the report said.

The Pfizer Covid-19 vaccine is the most commonly used jab in the US and many other countries around the world.

According to official data from the US Centers for Disease Control and Prevention (CDC), the jab has been used 319 million times - more than half of the 540 million vaccines administered in the nation overall.

This includes the nearly 50 million Pfizer booster shots that have been administered to Americans.

The company doubled its Q4 sales this year when compared to last, to $23.84 billion over the last three months of last year, the report said.

More than half of that revenue, $12.5 billion, came from the Covid vaccines alone.

This revenue stream will remain intact for years to come, potentially even the next decade, if Pfizer has its way.