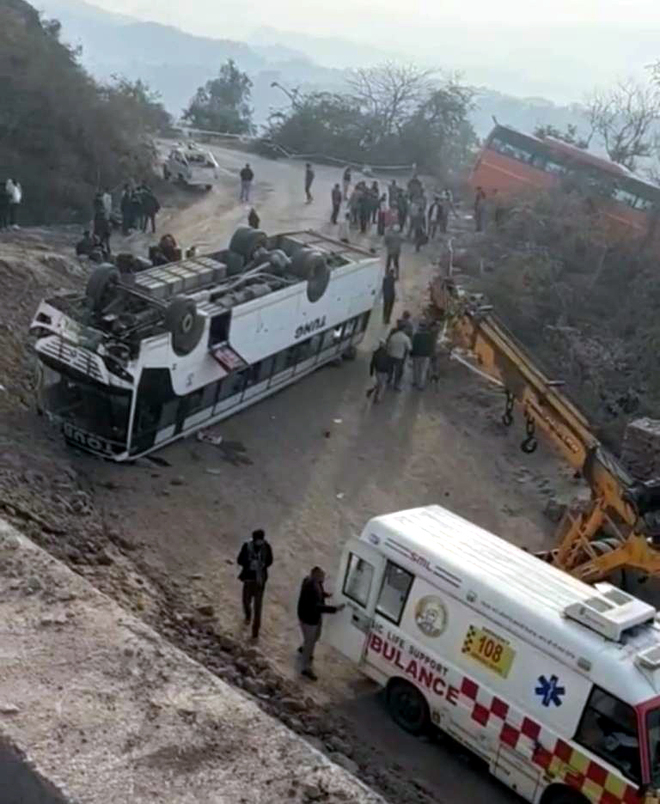 Rescue operation underway at an accident site near Garamod in Bilaspur on the Chandigarh-Manali NH on Sunday.

A woman was killed on the spot while five other persons suffered injuries when two tourist buses met with an accident at Swarghat in Bilaspur today.

Students of several states were travelling in three buses from Manali to Chandigarh after celebrating New Year.

The first bus turned turtle after the driver lost control of the vehicle near Garamod on the Chandigarh-Manali National Highway.

Buses were en route to Chandigarh

A passenger from Mumbai, Ruksin Madon (23), was helping others when the driver of the second bus lost control over the vehicle and it crushed her to death. The bus went on to hit the parapet on the left side.

Sources said some police personnel had signalled the second bus to stop but the driver was unable to apply brake on time. Five tourists, who sustained minor injuries, have been discharged after first-aid from Civil Hospital, Nalagarh.

Family members of the deceased have been informed and they are on their way to Bilaspur, said SP Saju Ram Rana. The body will be handed over to them after a post-mortem examination, he added. Preliminary investigations pointed out that the driver was tired as he did not have a sound sleep last night.