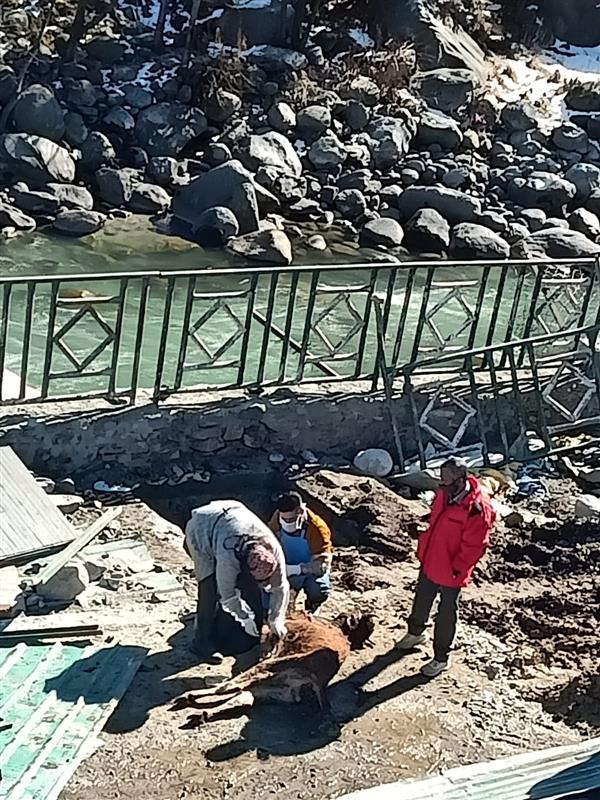 Officials of the Animal Husbandry Department conduct the post-mortem of a calf at Gau Sadan at Rangadi in Manali on Friday.

As many as 15 cows, calves and bulls were found dead in the Gau Sadan at Rangadi near Manali today.

The carcasses were scattered in the cowshed and a foul smell emanated from the place as they had not been removed for days. Recently, a strategy was prepared at a meeting of the administration for the care of destitute animals during the winter.

A blueprint was prepared, but all arrangements collapsed. Animals have died at the Manali Gau Sadan in the past several days.

An investigation will be conducted to know how these animals came here. I will personally look into the matter as to why the carcasses were not disposed of timely.— Surender Thakur, SDM, Manali

There are four employees at the Gau Sadan who provide fodder and water to the livestock. The caretaker of the Gau Sadan had reportedly informed the Manali Municipal Council about the situation, but no concrete steps were taken to save the animals. The carcasses of cows and calves were lying in the cowshed, but no one bothered to dispose them of.

A pharmacist of the Animal Husbandry Department visits the Gau Sadan on a weekly basis to monitor the health of the animals. However, the incident highlights the lackadaisical approach of the authorities concerned.

Manali Municipal Council president Chaman Kapoor said, “The Gau Sadan is not located at a suitable place and the area witnesses severe cold and low temperatures. He had appealed to the state government to shift the Gau Sadan to a warmer region. The carcasses were dumped in a pit on Saturday”.

Deputy Director, Animal Husbandry, Dr Vishal Sharma said that the cause of death of animals would be determined in the postmortem report. No symptoms of any contagious disease were found in preliminary investigation. The carcasses could not be disposed of timely.

“A pharmacist visits the Gau Sadan on a weekly basis and treats ailing animals. The pharmacist is also engaged in vaccination campaigns, for insemination and providing door-to-door treatment. The Gau Sadan operators did not inform the department about the deaths of animals,” he added.

Manali SDM Surender Thakur said that the death of so many animals necessitated an inquiry. He added that only a few healthy bulls were kept in the Gau Sadan while all other animals had been shifted to the Gau Sadan at Katrain on the onset of the winter.

“An investigation will be conducted to know how these animals came here. I will personally look into the matter as to why the carcasses were not disposed of timely,” he said.