NDRF team yet to recover the body of second victim 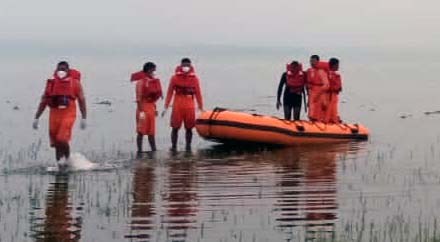 Two persons, identified as Raj Kumar (43) of Bhiyal village and Ranjeet Singh (32) of Nandpur Bhatoli village in Kangra district reportedly drowned in the Pong Dam reservoir near Dehra last evening. Local divers and the police launched a search operation in the evening but could not trace the duo.

An NDRF team, led by Inspector Yog Raj, fished out Ranjeet’s body early this morning within half a km radius of the spot where the duo were taking a bath. However, Raj Kumar’s body was yet to be recovered.

As per the police, the duo along with their associate Madan Gopal consumed liquor in Nandpur Bhatolli village and went to the Pong reservoir. Raj Kumar and Ranjeet knew how to swim and went into the shallow water of the reservoir. However, they slipped and were drowned.

Madan tried to persuade them not to go into the reservoir but the duo ignored his advice. After waiting for a long time, Madan informed the up- pradhan of the local gram panchayat, who intimated Haripur police station about the incident.

DSP, Dehra, Ankit Sharma said the NDRF team was still trying to recover the body of the second victim in the reservoir.