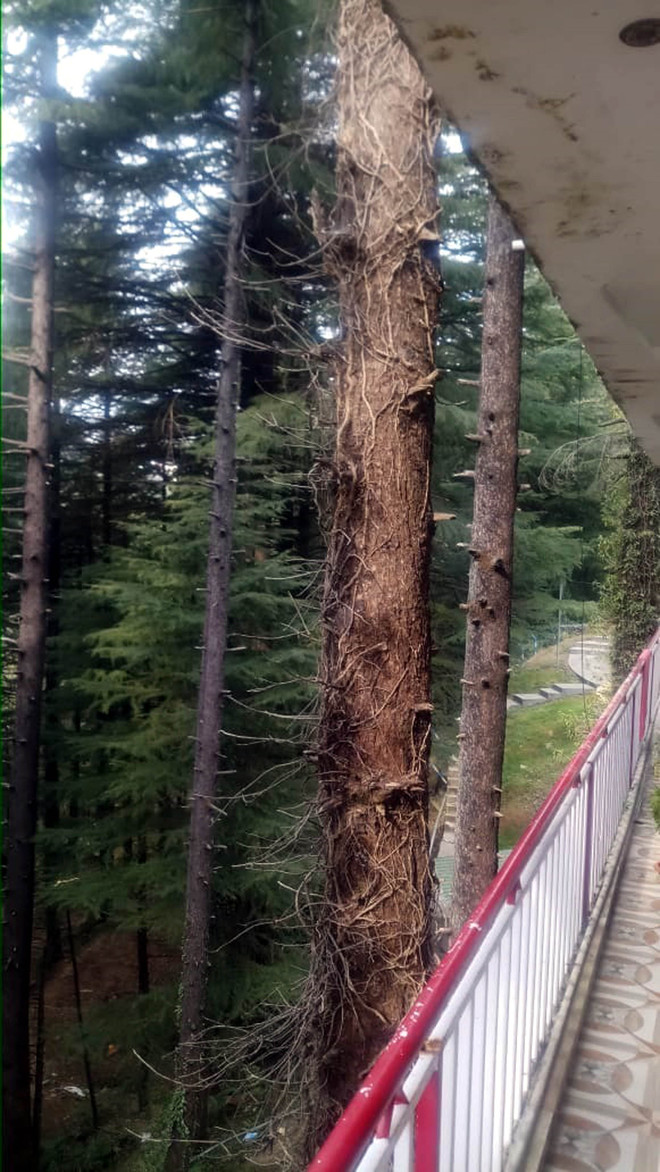 Dried up deodar trees trapped in buildings at McLeodganj.

At least 20 deodar trees have been dried up in the area above the Dal Lake in the Naddi area here to raise illegal constructions.

Local residents have submitted complaints in this regard to the Forest Department and the civic body. Raghav, a local resident, while talking to The Tribune, said it was painful to see a patch of dried deodar trees in the Naddi area. Since all trees in the surrounding areas were green, it was obvious that these trees were deliberately dried up by some people to raise buildings. If the area was bereft of the green cover, it would lose its charm as a tourist place, he added.

Gazalla Abdullah, a green activist from McLeodganj, said she had brought the matter to the notice of the Forest Department and the MC authorities that people were trapping green trees and also illegally felling them to raise hotels and buildings. However, no action seemed to have been taken so far.

Last year on the orders of Himachal High Court, the Dharamsala MC had forced many hotel owners to free the trees from their buildings. However, now once again fresh constructions are coming up in which trees are being trapped in buildings and being eventually dried up.

DFO, Dharamsala, Sanjeev Kumar, said the area in which trees had been dried up or trapped in buildings fell under the jurisdiction of the Dharamsala MC. The DFO said he would still direct officials to check and register a case if any violation under the Forest Act was found.

Last year, the NGT had banned all constructions in the McLeodganj hill stating that the place had already exhausted its carrying capacity. Despite that, new constructions are coming up in the McLeodganj area. During the lockdown period, many new buildings have come up on the Dharamkot road and McLeodganj. In some cases ,the Dharamsala MC also issued notices to the violators. Ever since the present government has taken over, no facility has been added to the McLeodganj area despite the fact that it was the centre of all tourism activities in Kangra district.