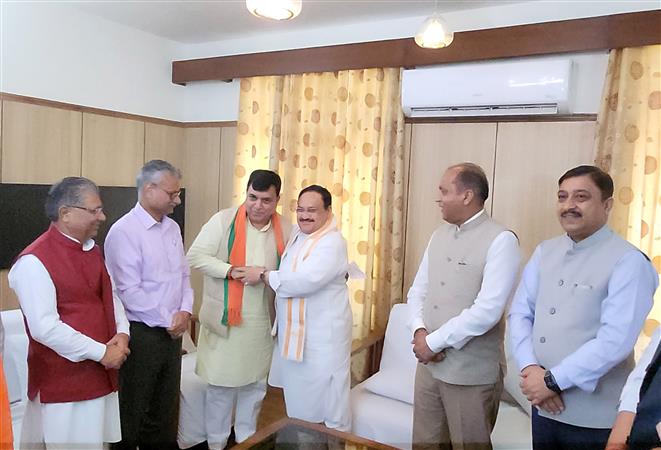 Former MP Suresh Chandel rejoins the BJP in the presence of JP Nadda and CM Jai Ram Thakur in Bilaspur on Tuesday.

Chandel had remained state BJP president. He belongs to Bilaspur district and had thrice represented Hamirpur in the Lok Sabha in 1998, 1999 and 2004. Eleven MPs, including Chandel, were expelled from Parliament on December 23, 2005, for accepting money to raise questions in the House.

Chandel had joined the Congress when the BJP denied him ticket from Bilaspur to fight the 2017 Assembly elections.

He had unsuccessfully contested the 2012 Assembly election from the Bilaspur Sadar constituency on the BJP ticket and lost to Congress candidate Bambar Thakur by a margin of 5,141 votes

Nadda said that Chandel was his old associate. “I persuaded Suresh Chandel to rejoin the BJP and make it stronger in the region. It is homecoming for Chandel. Chief Minister Jai Ram Thakur and other state leaders were well aware that Chandel will rejoin the party,” he added.

Kashyap said Chandel’s re-induction would strengthen the BJP at the grass-roots level. He added that Chandel had been successful as state BJP president and the party would gain from his vast political experience.