Were engaged by NHAI to change course of rivulet 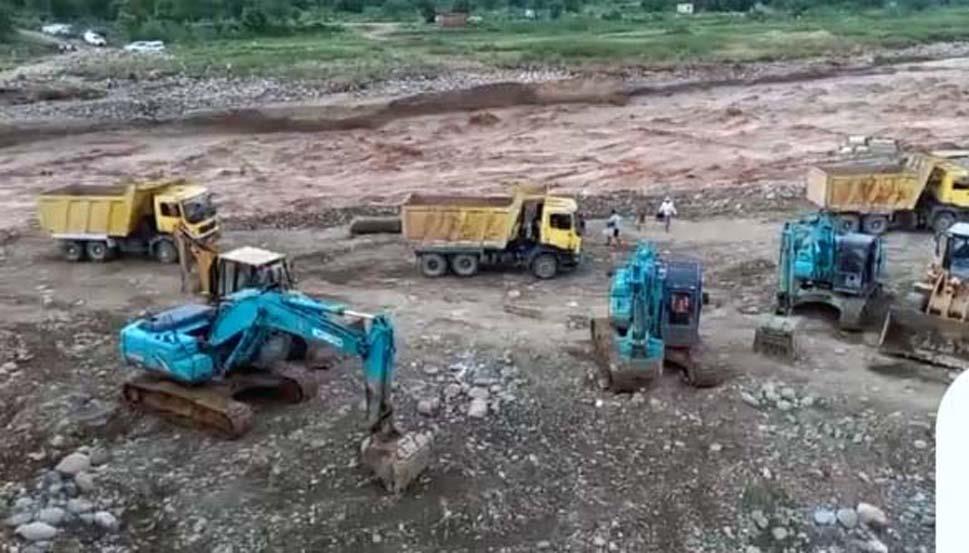 Cranes pressed into service to rescue workers marooned in the Chakki rivulet at Kandwal in Nurpur. Tribune photo

As many as 30 workers engaged by the National Highways Authority of India NHAI for changing the course of the Chakki rivulet at Kandwal in Nurpur were stuck on the riverbed due to flash floods late last evening following heavy rain in upper areas of Kangra district and neighbouring Bhattiyat subdivision of Chamba district.

Channels being created on riverbed

Deep channels are being created on the Chakki riverbed, which will be followed by covering the area with concrete bunds to reduce the strong water flow by over 70 per cent and ultimately secure all pillars of the bridge. NHAI official

The workers, who were operating JCB and Poclain machines, were marooned in rising waters of the Chakki rivulet. A private company engaged by the NHAI had pressed its workforce and machinery into service to change the rivulet’s course. Thereafter, the NHAI used its cranes to lift the workers from the riverbed.

After the Chakki railway bridge was washed away on August 20, the rivulet had changed its course towards two pillars of the inter-state Chakki road bridge on the Pathankot-Mandi National Highway-154, connecting Punjab and Himachal Pradesh. The foundation of the pillars of the bridge had eroded due to flash floods, posing a threat to the bridge that was opened in 2011.

The NHAI had closed this bridge initially on August 20 and re-opened it on August 22. However, after reviewing the condition of the eroded pillars and the impact of severe flash floods, it again closed the bridge on the evening of August 24.

The NHAI deployed its machinery to divert the course of the rivulet last Monday and intensified operations on August 26, taking technical assistance of the Army. The NHAI and Indian Army’s machinery are working jointly to divert the river flow by creating an alternate channel, thereby effectively reducing the chances of further erosion.