College affiliations are renewed on the basis of inspection reports 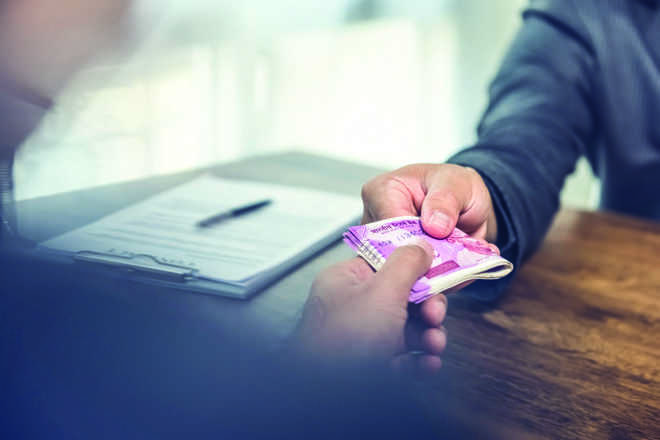 Four members of two teams of the National Council for Teacher Education (NCTE) on a visit to Kangra to inspect B.Ed colleges were arrested today for alleged corruption and cash amounting to Rs 13.48 lakh seized from them.

Two members of one team were arrested in the morning by officials of the state Vigilance and Anti-Corruption Bureau allegedly with Rs 11.48 lakh cash following a raid at a hotel in Gaggal where they were putting up, the police said. The other team was allegedly caught red-handed in the evening accepting Rs 2 lakh bribe from a college in Indora (Kangra). Those arrested from the hotel include Sanjeev Kumar of Aligarh and Kavya Dubey of Jhansi (both places in UP). The other team comprised Seema Sharma of Bhivani Nagar in Meerut (UP) and Mahesh Prashad Jain of Shivaji Nagar in Bhopal (MP).

Sources said raids were being conducted as more NCTE teams were carrying out inspection of B.Ed colleges in the region.

Vigilance and Anti-Corruption Bureau SP Balbir Thakur said the four arrested officials had been inspecting colleges for the last few days. “We got a tip-off that they were extorting money from B.Ed colleges. The two persons arrested from a Gaggal hotel were to fly out from Dharamsala in the afternoon. The other team was nabbed red-handed from a college,” he said. A case has been registered under the Prevention of Corruption Act.

All B.Ed and M.Ed colleges across the country are affiliated with the NCTE, which sends teams comprising officials of the level of Assistant Professor or Associate Professor from B.Ed or other colleges to inspect institutes at regular intervals. The affiliation of colleges is renewed on the basis of such inspection reports. Sources said in the present case, the arrested persons appeared to have allegedly collected money for overlooking shortcomings in colleges.