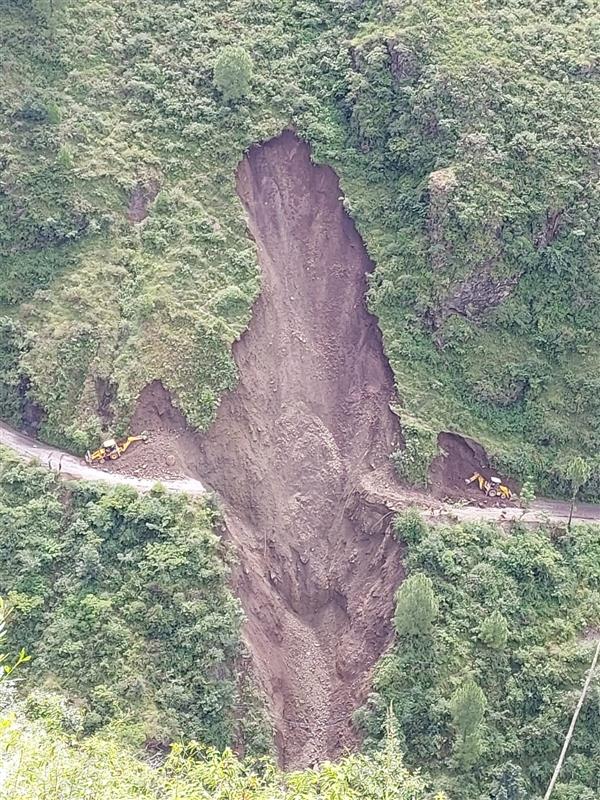 Road at Kacchi Dhank in Sirmaur has caved in after heavy rain.

Seven persons, including four children, were killed in three rain-damage incidents in Sirmaur district in the last 24 hours.

Among those killed were five persons, including four members of a family, who were buried under mounds of debris when the hill overlooking their house caved in following incessant downpour at Khujvari village in Rast panchayat of Ronhat area of Shillai sub division last night.

Those killed have been identified as Mamta (27), wife of Pradeep Kumar, his three daughters Ishita (8), Erang (2) and Alisha (6) and his niece Akankshika (7), who hails from Halla village, said DSP Paonta Sahib Bir Bahadur.

Pradeep, who sustained grievous injuries, is stated to be stable. He was rushed to a hospital at Ronhat for treatment.

Panchayat pradhan DR Gazta informed the police about the mishap following which rescue teams rushed to the spot in the wee hours. Five bodies were retrieved from the spot while Pradeep survived though he sustained injuries.

Chief Minister Jai Ram Thakur has offered condolence at the unfortunate incident. He has promised all possible help to the bereaved family.

Elsewhere in the district, a laborer Sandeep Soren, working at Baru Sahib-based educational institute, was electrocuted when his residence was inundated following rain last evening. Another person at Nohradhar was killed away after being buried under the debris while he was commuting on the road.

RK Gautam, Deputy Commissioner, Sirmaur, informed that as many as 170 roads, 90 power transformers and 85 water supply schemes had been hit owing to the incessant rain which lashed the district in the last 24 hours.

Efforts were underway by the staff of the Public Works Department (PWD) to restore the roads. The DC has appealed to the residents to be cautious while venturing out as the threat of landslides loomed large on various roads which were vulnerable.

In Paonta Sahib sub division, road measuring 270-m caved in at Kacchi Dhank on the Paonta Sahib-Shillai National Highway-707 following which the highway was closed for vehicular traffic. Alternative routes from Malvi and Bhatrog for Sataun have been identified for smaller vehicles.

SDM Paonta Sahib Vivek Mahajan informed that PWD staff has been directed to maintain the road for plying smaller vehicles while heavy vehicles will have to adopt the arterial route through Jakhna and Uttrakhand. The highway would remain closed for at least a week.