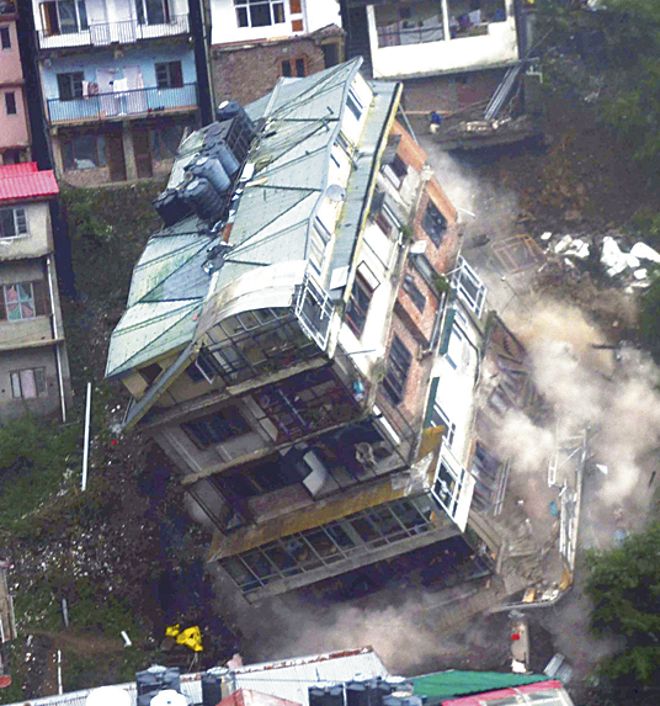 A building collapsed at Kachhi Ghati in Shimla recently. File

If the hazard, vulnerability and risk assessment (HVRA) carried out by the Shimla Municipal Corporation is to be believed, the city is staring at a repeat of disasters like Kachhi Ghati.

The assessment, funded by the United Nation Development Programme and executed by TARU in 2016, found that as many as 65 per cent of the buildings it surveyed were “in class of high vulnerability”. “About 65 per cent of the 2,795 buildings surveyed are vulnerable owing to their age, type of construction and structural details across all wards,” said the comprehensive report.

“The building vulnerability is too high that natural calamities like earthquakes and landslides can cause a catastrophic damage,” it said.

The report put the city in seismic zone IV (high damage risk zone), and as far as landslide hazard is concerned, 51 per cent area is in moderate and 33 per cent is in high hazard zone. Given the risk, the report said 5,000 to over 20,000 people might die in the city in the event of a significant earthquake.

Tikender Panwar, former Deputy Mayor and an urban planning expert, said, “It was essential to measure the vulnerability quotient. As per the findings, Shimla is on the brink of a disaster. If the survey is not integrated in the development plan, it will end up as an exercise in futility.”

Given the high vulnerability of 65 per cent buildings, experts said the way forward was to retrofit these buildings in phases to strengthen them. “Retrofitting is key to reducing the vulnerabilities of these buildings. Demolition is not the solution. The government needs to make a budget for this massive exercise,” he said.

Meanwhile, the assessment also threw ample light on how difficult it would be for emergency services like ambulances and fire tenders to access certain areas in case of emergencies.