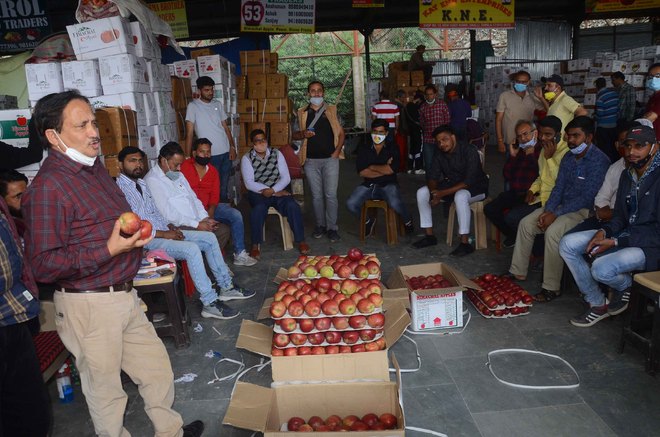 Buyers in the apple market at Bhatakufer in Shimla on Tuesday. Photo: Amit Kanwar

The Adani Group has announced prices for procuring apple for its CA stores. Compared to last year, the prices announced for premium apple are around 20 per cent less this time – the opening price for the premium apple last year was Rs 88 per kg. This time, it is Rs 72. The apple growers are not happy and some are even threatening to boycott the corporate giant.

“It’s very disheartening and the apple growers should boycott the organisation this time,” said Harish Chauhan, president of the Fruit, Vegetable and Flower Growers Association. “Also, their price-fixing mechanism is arbitrary. Neither is there any government official nor any representative of farmers when the prices are fixed,” said Chauhan.

Also read: Himachal apples are the best says actress Preity Zinta as she gives virtual tour of her family farms on Instagram

Manjeet Shilu, plant head of the Adani CA store at Bithal, said the prices offered by the corporate were good, especially considering the fact that growers do not have to pay for packing and grading. “We have a pool of around 17,000 growers who give us apple. We hold discussions with them before fixing the prices to get a sense of what they are expecting,” said Shilu. “And since we have announced the prices, we have not received even a single call from farmers to complain about the rates. Only those growers are complaining who never give apple to Adani stores,” he said.

Nevertheless, many growers are not convinced. “The rates they have announced are definitely poor. Farmers are getting better prices for good quality apple in mandis,” said Lokinder Bisht, president of the Progressive Growers Association. Alleging that the farmers are being exploited by the corporates, who have been given huge subsidies by the government to set up CA stores, Bisht said the government should instead give incentives to growers to set up small-volume cold stores so that they can control the supply chain whenever there is glut in the market and the prices crash.

Just a day back, Kisan Sangharash Samiti had demanded the introduction of Market Intervention Scheme on the lines of Kashmir to ensure that prices do not fluctuate too much. “If the government buys substantial amount of apple at reasonable prices, like it does through Nafed in Kashmir, the market will remain more or less stable and market forces will not be able to exploit the growers,” said Bisht.

According to the rates announced today, the produce having less than 60 per cent colour will be sold for Rs 12 to Rs 15. For the record, the cost of production per kg of apple is around Rs 25.