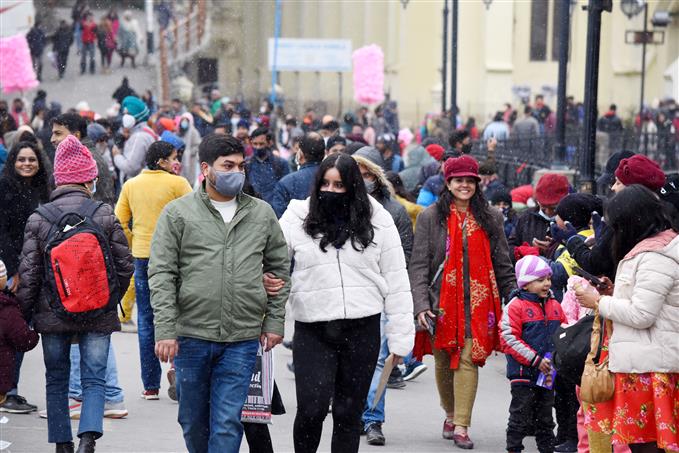 With over 30,000 vehicles expected to enter Shimla till New Year, four additional reserve forces have been deployed in the district, especially in crowded and congested areas, to ensure the smooth traffic movement.

“We have received four reserve battalions for winter. Shimla has been divided in five zones and an additional police force with patrolling vehicles, headed by DSP or ASP, is in place,” said Monika Bhutungru, SP, Shimla.

The forces have been deployed at Kufri and Narkanda, The Mall, The Ridge, the Shoghi barrier, Tawi More, the bus stand and other busy locations. Restricted roads in the vicinity of AG Chowk, Kennedy Chowk, Chaura Maidan and Navbahar Chowk will be opened for parking on New Year.

The MeT office has predicted snowfall and tourists are advised to come in 4X4 vehicles with experienced drivers. For safety reasons, the tourists should travel after receiving both vaccine doses, she said, adding that they were welcomed and advised to follow Covid norms.

“The occupancy in our properties in Shimla was between 80% and 85% this weekend, which is expected to go up on New Year,” said Amit Kashyap, Director of Tourism and Civil Aviation-cum-MD of the Himachal Pradesh Tourism Development Corporation (HPTDC).

“The police diverted the traffic coming from Shoghi and Tutikandi, near the bypass, yesterday due to heavy vehicular inflow in the town,” said Tourism Industry Stakeholders’ Association president MK Seth, adding that even locals were not allowed to enter Shimla through the main road, and the residents and tourists were a harassed lot.