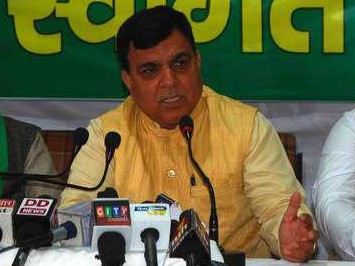 In another jolt to Congress in Himachal, former Member of Parliament from Hamirpur, Suresh Chandel, today joined the BJP in Bilapsur in the presence of BJP national president JP Nadda and Chief Minister Jairam Thakur.

Chandel, who was expelled from the Lok Sabha after the cash-for-query sting operation in 2005, had joined the Congress in 2019.

Congratulating Suresh Chandel for the home coming, Nadda said that Chandel, his old associate had left the BJP and joined Congress but was persuaded to return to the parent party and make it stronger.

Chandel also remained the BJP state president from 1998 to 2000. Chandel expressed his utmost happiness to come back into the BJP fold.

Speaking on the occasion, state president Suresh Kashyap said, “We are happy that Suresh Chandel resigned from the Congress party and joined BJP. He has had a long association with BJP national president Jagat Prakash Nadda.”

Terming the move as a big blow to Congress, Kashyap said Congress leaders are tired of nepotism and serving particular families and are joining the BJP. “The BJP will win the upcoming state elections with a greater majority than before,” he added.