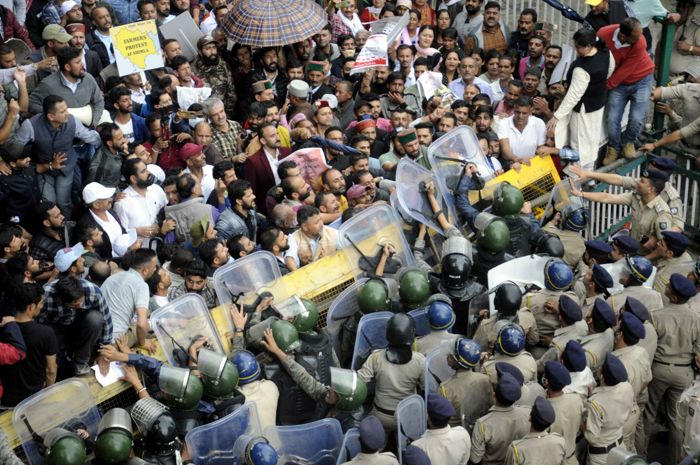 Protesters try to cross the barricades at the Secretariat in Shimla on Friday. Photo: Lalit Kumar

After organising their biggest protest since 1990 in Shimla today, the apple growers returned with an assurance from Chief Secretary RD Dhiman that the government will look into their demands and grievances.

Giving the government 10 days’ time, Sanyukt Kisan Manch (SKM), under which 27 apple associations have come together to raise the challenges the apple industry is facing, said they would launch a bigger protest after August 15 if the government did not offer solution to the issues raised by them.

“We had an hour-long meeting with the Chief Secretary, but there’s still no clarity on various points. We have decided to give the government 10 days’ time it asked for. In case nothing concrete happens, the government will have to face a much bigger agitation,” said SKM convener Harish Chauhan after meeting the Chief Secretary in the evening. “It’s unfortunate that Chief Minister Jai Ram Thakur chose to stay away and not meet the growers,” said Chauhan.

We had an hour-long meeting with the Chief Secretary. We have decided to give the government 10 days’ time it asked for. In case nothing concrete happens, the government will have to face a much bigger agitation. —Convener, SKM

The growers reached the Secretariat, which had been barricaded at various points to keep the protesters at one spot, at around 12 noon to protest the increasing input costs and other challenges hurting the apple industry. Despite heavy rains last night in upper Shimla area, due to which link roads at various places were damaged and blocked, the protesters, including women and elderly, reached the Secretariat in large numbers.

“I was a part of the 1990 agitation as well. Our livelihood had come under threat then and we had no choice but to fight. The situation is the same today, and we will again fight it out,” said Anita Mehta from Kotgarh. The youth accounted for majority of the protesters.

“Instead of looking for jobs, our youth take up horticulture as the means of livelihood. They know it’s their future at stake, so they are out on the streets to save it,” said Deepak Sofra from Kotkhai.

The protest was also bolstered by the presence of the CPM MLA Rakesh Singha, Congress MLA Rohit Thakur and AAP leaders. Even the workers from these parties joined the protest, leaving behind their political affiliation. “The government is merely making announcements to distract farmers. If the government was serious to provide relief to the growers, it would have taken it up with the Centre before the harvesting season,” said Congress MLA Rohit Thakur.

Overall, barring some scuffle and pushing at the barricades between the protesters and police personnel, the protest remained peaceful.

The apple growers’ protest threw traffic out of gear in the city. During the protest, the Sanjauli-Chotta Shimla road was blocked, and traffic was diverted on to the Shoghi bypass and the Navbahar-Governor House-Lift road.