Claim they got assurances | Adani spokesperson says, plant official not authorised to do so 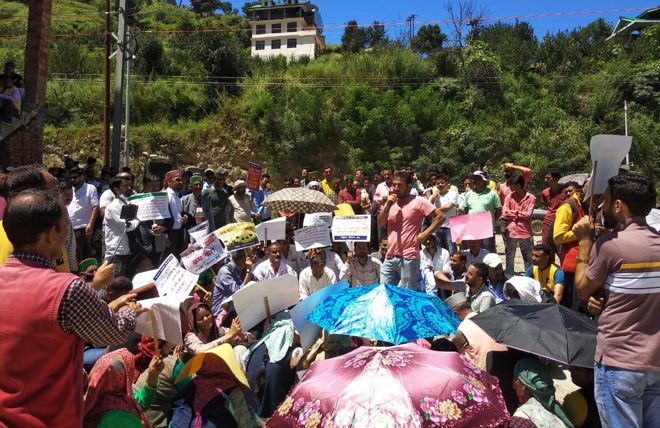 Apple growers claimed to have extracted some assurances from the local management of Adani-owned CA stores following their protest in front of these stores, which are located in Rohru, Rampur and Sainj, today.

“The Adani stores have agreed to process the payment to growers within 24 hours of the procurement. Also, they have agreed to check the pressure and starch of the fruit the moment gate-pass for the vehicle is made,” said Sanyukt Kisan Manch co-convener Sanjay Chauhan.

An Adani spokesperson, however, denied any such assurances have been made. “Plant officials can’t make any such commitment. It’s not possible to make the payment immediately. We process it in 2-3 days and have never received any complaint,” the spokesperson said. “Besides, there’s a long queue of vehicles at the stores. So, it’s not possible to check the pressure and starch immediately,” he said.

Attractive prices being given

Meanwhile, rejecting the prices offered by the Adani stores, the growers said private CA stores need to factor in the inflation in input costs before announcing the rates. “We have demanded revision of prices. The rate should be the higher and input cost factor should be increased,” said Chauhan. “The local management has assured us that it will send our demand to the rate deciding committee. We have given them a week’s time to respond,” said Chauhan. Besides, the growers have demanded that the rejected apple should be returned to the growers.

The apple growers, despite being in the middle of the harvest season, said the protest would not stop until the government and the private CA stores accept their demands. “If the Adani stores do not take our demands seriously, we will launch a bigger agitation and will not let a single box of apple come out from their stores for sale,” said Chauhan.

The protesters also issued a warning to political parties who are not standing with farmers. “Elections are just around the corner. We will ask them where were they when we were fighting to save our livelihood,” said Praveen Mehta, one of the protesters.