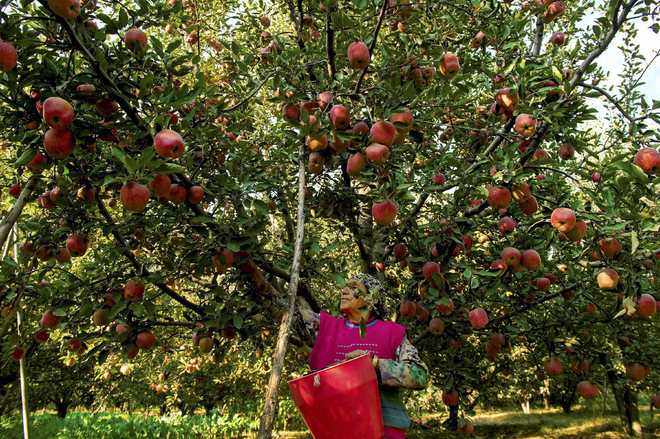 The apple harvest season has already begun – it will pick up pace in another two weeks – but most of the apple-growing areas are yet to see the arrival of Nepalese labourers. File photo

Most apple growers in the state, it seems, will have to make do without Nepalese labourers this season. The apple harvest season has already begun – it will pick up pace in another two weeks – but most of the apple-growing areas are yet to see the arrival of Nepalese labourers.

As it has become more or less clear that Nepalese labourers will be scarce this season, the orchardists have started looking for alternative labour from regions such as Chamba, Sirmaur, Uttar Pradesh and Uttarakhand. — Prem Chauhan, orchardist from Kotkhai

The state government has put a process in place to help the orchardists bring in Nepalese labourers, but most of them feel it will help only a small number of farmers. “I don’t think it’s going to work out for many farmers, especially medium and small orchardists,” said Harish Chauhan, president, Himachal Pradesh Fruit, Vegetables and Flowers Growers Association.

“The process requires the growers to submit the citizen cards of the labourers to the SDMs of their respective areas, upon which travel passes will be issued for them. The problem is that not many growers have the contact numbers of the labourers. So, how are they going to contact them and get their citizen cards?” asked Chauhan. “Besides, the season has already started. It might be too late by the time most of them arrive”.

A couple of days ago, a bus carrying some 20-odd Nepalese labourers had arrived in Kotkhai. “A few labourers have indeed come but that’s just a drop in the ocean,” said Deepak Dhillon, a farmer from Kotkhai. “Some big farmers need around 100 labourers, so one could understand the number of labourers required in the region during the harvest season,” he added.

Sources in the Himachal Roadways Transport Corporation confirmed that so far only one bus had gone to fetch Nepalese labourers from the border, and there were no further orders in this regard.

With the season about to peak and Nepalese labourers arriving in a trickle, many farmers have started looking for an alternative. “As it has become more or less clear that Nepalese labourers will be scarce, the orchardists have started looking for alternative labour from Chamba, Sirmaur, Uttar Pradesh and Uttarakhand,” said Prem Chauhan, an orchardist from Kotkhai.

The increasing coronavirus cases in India and travel restrictions in Nepal will make the Nepalese labourers less inclined to leave their homes. “The labourers, who arrived a few days ago, told us that only those residing near the border are willing to come,” said Dhillon.